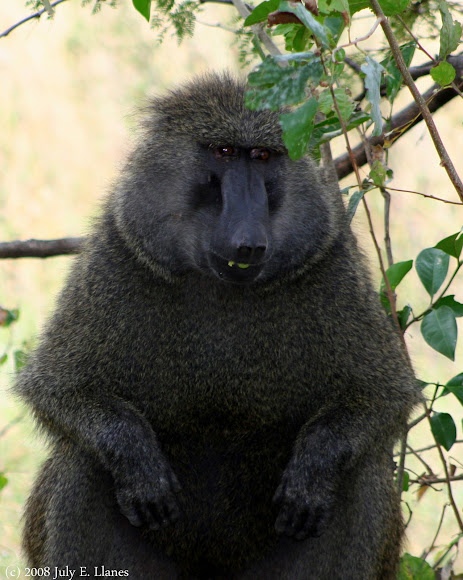 The olive baboon is named for its coat, which, at a distance, is a shade of green-grey.[3] (Its alternate name comes from the Egyptian god Anubis, who was often represented by a dog head resembling the dog-like muzzle of the baboon.) At closer range, its coat is multi-colored, due to rings of yellow-brown and black on the hairs.[4] The hair on the baboon's face, however, is finer and ranges from dark grey to black.[3] This coloration is shared by both sexes, although males have a mane of longer hair that tapers down to ordinary length along the back.[5] Besides the mane, the male olive baboon differs from the female in terms of size and weight; males are, on average, 70 cm tall and weigh 24 kg; females measure 60 cm and 14.7 kg.[5] Like other baboons, the olive baboon has a long, pointed, dog-like muzzle.[5] In fact, along with the muzzle, the animal's tail (38–58 cm) and four-legged gait can make baboons seem very canine.[6] The tail almost looks as if it is broken, as it is held upright over the rump for the first quarter, after which it drops sharply.[3] The bare patch of a baboon's rump, famously seen in cartoons and movies, is a good deal smaller in the olive baboon.[5] The olive baboon, like most cercopithecines, has a cheek pouch with which to store food.[7]

The olive baboon inhabits a strip of 25 equatorial African countries, very nearly ranging from the east to west coast of the continent.[7] The exact boundaries of this strip are not clearly defined, as the species' territory overlaps with that of other baboon species.[3] In many places, this has resulted in cross-breeding between species.[3] For example, there has been considerable hybridization between the olive baboon and the Hamadryas baboon in Ethiopia.[6] Cross-breeding with the yellow baboon and the Guinea baboon has also been observed.[3] Although this has been noted, the hybrids have not yet been heavily studied.[3] Throughout its wide range, the olive baboon can be found in a number of different habitats.[5] It is usually classified as savanna-dwelling, living in the wide plains of the grasslands.[8] The grasslands, especially those near open woodland, do make up a large part of its habitat, but the baboon also inhabits rainforests and deserts.[5] Uganda and the Democratic Republic of the Congo, for instance, both support olive baboon populations in dense tropical forests.[3]