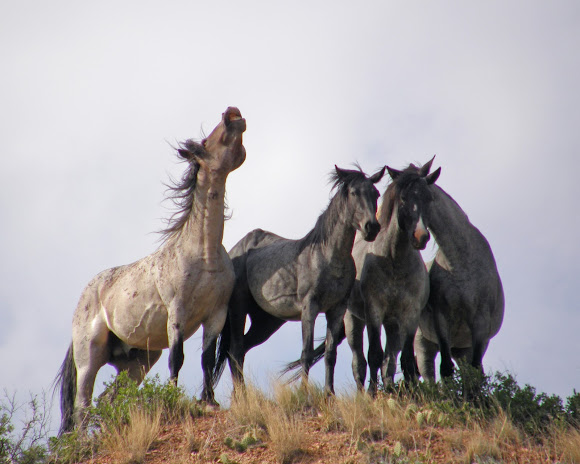 The Nokota horse is a feral and semi-feral horse breed located in the badlands of southwestern North Dakota in the United States. The breed developed in the 19th century from foundation bloodstock consisting of ranch-bred horses produced from the horses of local Native Americans mixed with Spanish horses, Thoroughbreds, harness horses and related breeds. The Nokota was almost wiped out during the early 20th century when ranchers, in cooperation with state and federal agencies, worked together to reduce competition for livestock grazing. However, when Theodore Roosevelt National Park was created in the 1940s, a few bands were inadvertently trapped inside, and thus were preserved. In 1986, the Park sold off a large number of horses, including herd stallions, and released several stallions with outside bloodlines into the herds. At this point, brothers Leo and Frank Kuntz began purchasing the horses with the aim of preserving the breed, and in 1999 started the Nokota Horse Conservancy, later beginning a breed registry through the same organization. Later, a second, short-lived, registry was begun by another organization in Minnesota. In 2009, the North Dakota Badlands Horse Registry was created, which registers the slightly different type of horses which have been removed from the park in recent years. Today, the park conducts regular thinning of the herd to keep numbers between 70 and 110, and the excess horses are sold off. The Nokota horse has an angular frame, is commonly blue roan in color, and often exhibits an ambling gait called the "Indian shuffle". The breed is generally separated into two sections, the traditional and the ranch type, which differ slightly in conformation and height. They are used in many events, including endurance riding, western riding and English disciplines.

When time, and money permit me to travel there, I will have to make it a destination. I would love to be able to both watch and capture some of these beauties via camera. Thanks for the information

Thank you Willie. This herd of wild horses qualifies as one of the most noble animals I have ever seen. We are so lucky to have places like Theodore Roosevelt National Park, where they are protected. This park is an effort to reach, but well worth it!

Congrats, Donna on both your captures of these magnificent animals, and your spotting of the day award. Perhaps someday, I will be blessed to see wild horses and make some captures of my own. Until then, I am blessed to be able to see them through your spotting

Thank you so much, everyone!

Congratulations what a great site Donna :)

Congrats Donna...I loved this shot the moment I saw it!

Congratulations Donna! This beautiful photo has been selected as Spotting of the Day!

Thank you FallynLeighSchwartz for the information. It's great to know more about the history of these beautiful horses.

Are these Nokotas or Mustangs?

Thanks, Karen. I hadn't noticed the oversight. I've taken care of it.

One of mine too Donna!
Where you know the common name of the species, please could you look up & add the scientific name - it is very easy to do on a Google search. That takes the spotting out of the "unknown" list. We would also appreciate it if you could add a reference link & complete some info in the details field for your spottings.

Thank you Lisa. This shot is one of my favorites, too.