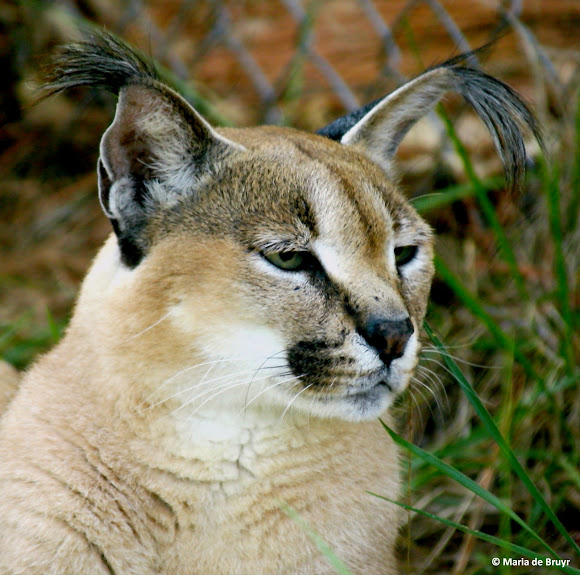 The word caracal comes from the Turkish word "karakulak", meaning "black ear". The largest of the “small cats” (as opposed to large cats such as tigers and lions), it has black ears with tufts, but it is considered to be related to the serval rather than lynx. It is theorized that they use the tufts for communication. They are very good at hiding and not seen often in the wild. Their fur ranges in color from sandy beige to red (in South Africa, they are called “rooi kat” or red cat), with melanistic (black-colored) having also been spotted. The underbelly is light with tawny spots. Their pupils contract to circles rather than slits as is the case with most small cats. It is a slender, muscular cat with long legs and a short tail. Males typically weigh 13-18 kg (29-40 lb); females weigh about 11 kg (24 lb). They primarily hunt at night and will seek out prey larger than themselves such as antelope or sitting ostriches; they also eat rodents, hares, hyrax, dik dik, duiker and monkeys. Because they also prey on domestic livestock, they are sometimes considered pests. They can obtain their moisture from their prey and sometimes hide uneaten prey in the branches of trees. They can jump up to 10 feet horizontally and 6 feet vertically and excel in catching birds in flight. In India and Iran, they used to be used to hunt birds for sport. Owners would have contests to see how many pigeons their cat could bring down in a single try, often reaching 10 or more birds. Caracals help keep down the numbers of small herbivores that compete with larger herbivores for grazing. Kittens are able to leave the birthing den at around one month and are weaned at about 10 weeks; they may stay with the mother for up to a year when they start to reach sexual maturity.

The first photo is of a male, the second and third photos of a female, and the fourth photo is of two males. These cats are usually solitary in the wild, but in a wildlife sanctuary where they do not need to compete for food, some can be paired for companionship. The photos are from 2011 and 2008. These caracals were seen at a rescue sanctuary for exotic wildlife (http://www.carolinatigerrescue.org/anima...) Other sources: http://www.wildcatconservation.org/Carac... http://www.sandiegozoo.org/animalbytes/t...

They are indeed, Owl! I just wish they were not sold in the pet trade.

Thank you, Sachin! They are such beautiful cats. I have hoped to spot one in the wild but that hasn't happened yet.