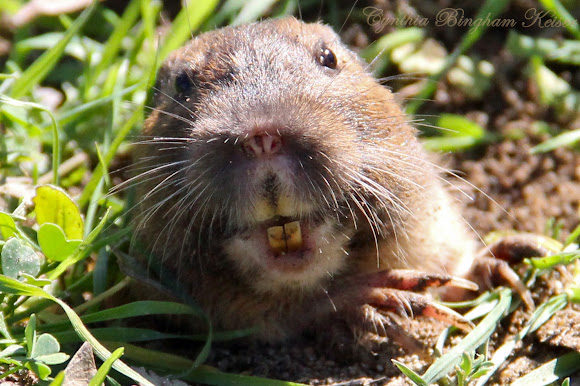 Brown rodent with large, pocket cheeks and a light tan color around the mouth. It has intimidatingly large, flat teeth that it will use to defend itself. The claws are long and are used for digging the burrows.

Burrows in the ground along trail at Kit Carson park

"...native to western North America, from California east to Texas and from southern Utah and Colorado south to Mexico. It is also known in some sources as valley pocket gopher, particularly in California. Their most characteristic features are their large cheek pouches, from which the word "pocket" in their name derives. " - Wikipedia

Thank you J, Yuko and Thurd13!

Me too! It's too bad they're so destructive.

I love its face!

:) Thank you Ava! Unfortunately we do have these in our yard but they're not as brave... unfortunately.

Wow! What a great series (as long as it's not in my garden!)

I think it's adorable too. It would be more so if it didn't have those nasty teeth! Karen, it may be a mama. It was pulling some grasses into the hole but was more intent on watching me.

How adorable! Fantastic that it let you get so close!
It may be young or perhaps a female with babies checking you were no threat?

Thank you all. I was glad this one was as brave, or young inexperienced like you said Emma! The others I noticed just pulled their heads down into the hole and hid.

Sometimes when they are young,the animals feel more confident of themselves and they are more curious. I have noticed often that the younger ones will hang around for a longer time to check you out.

Wonderful series - and what a cute little guy.

Yes, I was on the trail and saw something move. It let me get only a couple feet away. It was very bold and stared me down!

Were you taking a walk and it just popped up?