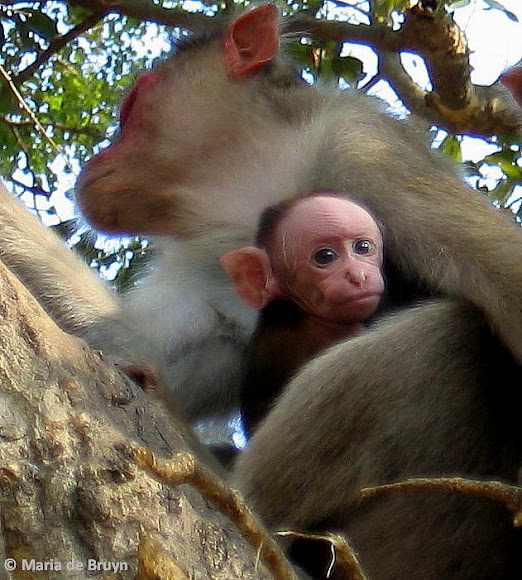 This primate’s name is related to the fur on its head, which resembles a hat. Its fur color varies from dusky brown to golden yellow, with black ears and black lower lip. The female's face is red. This macaque ranges in size from 35-60 cm, with a tail of 35-68 cm. The males weigh 5.5-9 kg, the females 3.5-4.5 kg. Both males and females have linear dominance hierarchies, with females tending to stay with the troop into which they are born. Females give birth to one young. When resting, they sit near one another.Their lifespan can surpass 30 years. These macaques have a wide range of gestures and behavior which can be easily differentiated. 'Lip smacking' is one of the most common behaviors, in which an individual opens and closes the mouth in rapid succession with tongue in between teeth and the lips pressing against each other to give a sound. A grimace consists of pulling back the upper lip to show the upper teeth; it is a gesture of fear or submission shown by subordinate to a dominant individual during aggressive encounters. These macaques also have distinct alarm calls for predators. The bonnet macaque eats fruit, nuts, seeds, flowers, insects, frogs, lizards and cereals. Where it lives near humans, it will eat food they give, also raiding their houses and crops.

This macaque is found in Southern India, where its distribution is limited by the Indian Ocean on three sides and the Godavari and Tapti Rivers along the North. Their habitat varies from dry deciduous forests to low wetlands.

These macaques live near the Elephanta caves and are very used to humans, approaching them quite closely in hopes of food. Other sources: http://www.walkthewilderness.net/2010/02... and http://www2.gsu.edu/~wwwvir/VirusInfo/pa...

Too cute - Love the last photo - what a wonderful spotting