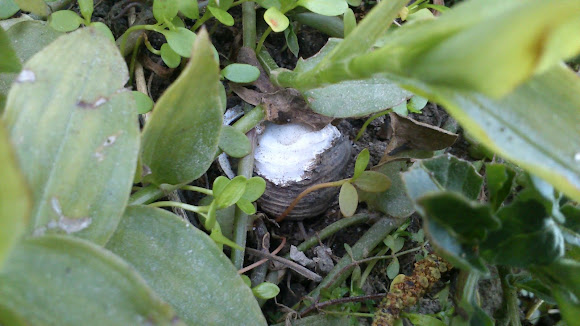 This species is of originally mainly Asian origin and thus it is often commonly called Asian clam or Asiatic clam. In the aquarium and koi pond trade it is often called Golden Clam or Golden Freshwater Clam. In Southeast Asia it is known as the prosperity clam or good luck clam. This species has been introduced into many parts of the world, including North America and Europe. Right after reaching maturity these clams produce eggs, followed by sperm. Even later, they produce eggs and sperm simultaneously. They can self-fertilize, and release up to 2,000 juveniles per day, and more than 100,000 in a lifetime. Juveniles are only 1 mm long when discharged, and take one to four years to reach maturity. At this time they are about one centimeter long. Adults can reach a length of about 5 cm. The outside of the shell is normally yellow-green with concentric rings. The color can flake, leaving white spots. The shells are lightly purple on the inside. They feed primarily on phytoplankton (algae), which they filter from the sandy or muddy bottom of streams, lakes, or canals.

Hello, I have removed your shell spottings from the Osteology Mission. Osteology is actually the study of vertebrate bones. It's a detailed study of the structure of bones, the skeletal elements, teeth, morphology, function and disease. Osteology aids in identifying vertebrate remains with regard to age, death, sex, growth, and development. From what I understand, shells are actually exoskeletons created by marine mollusks. Thank you for your understanding!