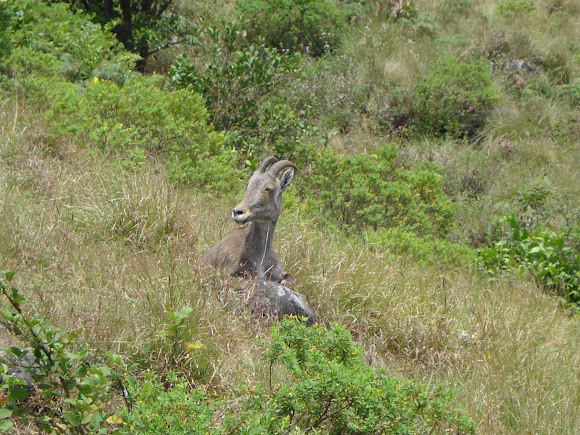 The Nilgiri Tahrs are stocky goats with short, coarse fur and a bristly mane. Males are larger than the females, and have a darker color when mature. Both sexes have curved horns, which are larger in the males, reaching up to 40 centimetres (16 in) for males and 30 centimetres (12 in) for females. Adult males weigh 80 to 100 kilograms (180 to 220 lb) and stand about 100 centimetres (39 in) tall at the shoulder. Adult males develop a light grey area on their backs and are thus called "saddlebacks".

These tahrs inhabit the open montane grassland habitat of the South Western Ghats montane rain forests ecoregion. At elevations from 1,200 to 2,600 metres (3,900 to 8,500 ft), the forests open into grasslands interspersed with pockets of stunted forests, locally known as sholas. These grassland habitats are surrounded by dense forests at the lower elevations. The Nilgiri Tahrs formerly ranged over these grasslands in large herds, but hunting and poaching in the nineteenth century reduced their population to as few as 100 animals by the early 20th century. Since that time their populations have increased somewhat, and presently number about 2000 individuals. Their range extends over 400 kilometres (250 mi) from north to south, and Eravikulam National Park is home to the largest population. The other significant concentration is in the Nilgiri Hills, with smaller populations in the Anamalai Hills, Periyar National Park, Palni Hills and other pockets in the Western Ghats south of Eravikulam, almost to India's southern tip. A small population of Tahr numbering around 200 are known to inhibit the Ponmudi hills in the Trivandrum district of Kerala. One of the hills in the Ponmudi range, namely Varaiaadu Mottai (mottai roughly translate as a 'hill' in local language) has also found its name from Nilgiri Tahr, indicating presence of the animal in that area.

Welcome Anshumaan... very nice to get close shots of these. Great information too. Thanks.