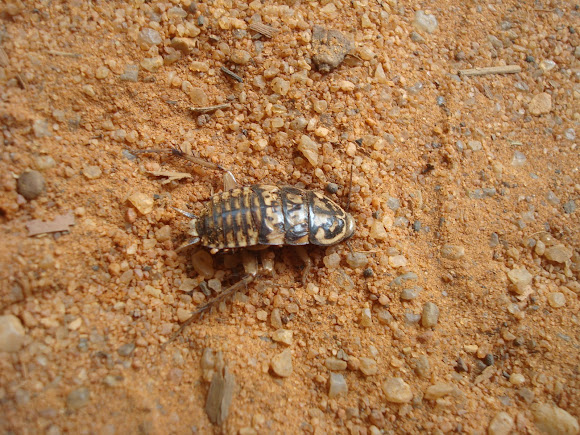 The length varies from 20 to 27 mm. The tegmina (forewings) of both sexes are small lobes, only about 4 mm long, and hind wings are entirely lacking. Its distinctive colors and patterns make this roach one of the most beautiful species kept as pet by many enthusiast around the world. Very fast in its movements this species is a egg layer and can climb smooth surfaces. In optimal conditions females can lay a large quantity of oothecas (egg case) containing about 15-30 eggs each. Juveniles have a tan uniform color, molt after molt they acquire the characteristic design that distinguish adults.

Originated in Indo-Malaysia, found is the northern part of Australia is now well established in various parts of the Western Hemisphere, including Mexico where it also migrated northward, near the Arizona border, few adults were also found in South California.

It has the ability to produce amyl acetate that smells like pear drops which it uses to defend itself against predators, therefore it would not be a god choice to use it as feeders for reptiles and amphibians.

Thank you very much for your correction!

tnx looks like the austalian one...but i'm not sure either...

It's a cockroach nymph. Not sure what kind.