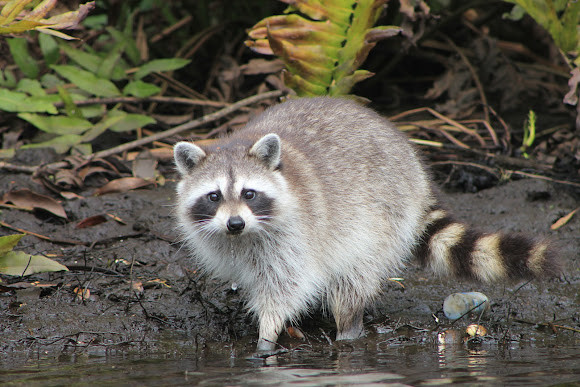 The raccoon i/ræˈkuːn/, Procyon lotor (sometimes spelled racoon),[2] also known as the common raccoon,[3] North American raccoon,[4] northern raccoon[5] and colloquially as coon,[6] is a medium-sized mammal native to North America. It is the largest of the procyonid family, having a body length of 40 to 70 cm (16 to 28 in) and a body weight of 3.5 to 9 kg (8 to 20 lb). The raccoon is usually nocturnal and is omnivorous, with a diet consisting of about 40% invertebrates, 33% plant foods, and 27% vertebrates. It has a grayish coat, of which almost 90% is dense underfur, which insulates against cold weather. Two of its most distinctive features are its extremely dexterous front paws and its facial mask, which are themes in the mythology of several Native American tribes. Raccoons are noted for their intelligence, with studies showing that they are able to remember the solution to tasks up to three years later. The original habitats of the raccoon are deciduous and mixed forests of North America, but due to their adaptability they have extended their range to mountainous areas, coastal marshes, and urban areas, where many homeowners consider them to be pests. As a result of escapes and deliberate introductions in the mid-20th century, raccoons are now also distributed across the European mainland, the Caucasus region and Japan. Though previously thought to be solitary, there is now evidence that raccoons engage in gender-specific social behavior. Related females often share a common area, while unrelated males live together in groups of up to four animals to maintain their positions against foreign males during the mating season, and other potential invaders. Home range sizes vary anywhere from 3 hectares for females in cities to 50 km2 for males in prairies (7 acres to 20 sq mi). After a gestation period of about 65 days, two to five young (known as a "kit", plural "kits") are born in spring. The kits are subsequently raised by their mother until dispersion in late fall. Although captive raccoons have been known to live over 20 years, their average life expectancy in the wild is only 1.8 to 3.1 years. In many areas hunting and traffic accidents are the two most common causes of death.

Although they have thrived in sparsely wooded areas in the last decades, raccoons depend on vertical structures to climb when they feel threatened.[127] Therefore, they avoid open terrain and areas with high concentrations of beech trees, as beech bark is too smooth to climb.[128] Tree hollows in old oaks or other trees and rock crevices are preferred by raccoons as sleeping, winter and litter dens. If such dens are unavailable or accessing them is inconvenient, raccoons use burrows dug by other mammals, dense undergrowth, roadside culverts in urban areas, or tree crotches.[129] In a study in the Solling range of hills in Germany, more than 60% of all sleeping places were used only once, but those used at least ten times accounted for about 70% of all uses.[130] Since amphibians, crustaceans, and other animals found around the shore of lakes and rivers are an important part of the raccoon's diet, lowland deciduous or mixed forests abundant with water and marshes sustain the highest population densities.[131] While population densities range from 0.5 to 3.2 animals per square kilometre (0.2 – 1.2 animals per square mile) in prairies and do not usually exceed 6 animals per square kilometer (2.3 animals per square mile) in upland hardwood forests

Captive raccoons have been known to live for more than 20 years.[117] However, the species' life expectancy in the wild is only 1.8 to 3.1 years, depending on the local conditions in terms of traffic volume, hunting, and weather severity.[118] It is not unusual for only half of the young born in one year to survive a full year.[119] After this point, the annual mortality rate drops to between 10% and 30%.[120] Young raccoons are vulnerable to losing their mother and to starvation, particularly in long and cold winters.[121] The most frequent natural cause of death in the North American raccoon population is distemper, which can reach epidemic proportions and kill most of a local raccoon population.[122] In areas with heavy vehicular traffic and extensive hunting, these factors can account for up to 90% of all deaths of adult raccoons.[123] The most important natural predators of the raccoon are bobcats, coyotes, and great horned owls, the latter mainly preying on young raccoons. In the Chesapeake Bay, raccoons are the most important mammalian prey for bald eagles.[124] In their introduced range in the former Soviet Union, their main predators are wolves, lynxes and eagle owls.[125] However, predation is not a significant cause of death, especially because larger predators have been exterminated in many areas inhabited by raccoons

Thanks, I may post another one, I just recently put on fb, another great shot of her

Was very Cooperative, I have probably 20 more pictures and Thanks