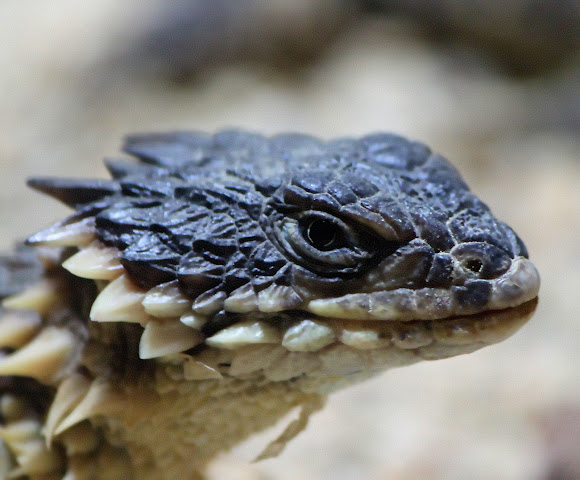 They live in colonies and dig burrows into the silty soil of the Themeda grassland in South Africa. The name Sungazer comes from their habit of sitting at the burrow entrance and facing the sun. Sungazers are protected by spiny dorsal scales and large spines run along the back of the head. The tail is armed by whorls of large spines and is waved at predators that pursue it into a burrow. Adults are 150-180 mm from the snout to the vent. The back is yellow to dark brown and the sides are yellow. Males can be identified by the presence of enlarged scales on the forearm. (Wikipedia)

Thanks a lot Laurie and Apple to help me to ID this little dragon.

Looks like Laurie found it! I would agree with that assessment. I looked through the horned lizards more thoroughly and all of them are much too flat to resemble this one.

looks a lot like the lizard in the pictures on this site: http://en.wikipedia.org/wiki/Giant_Girdl...

Likely some type of horned lizard, do you know where it originates from in the wild?

Added another pic to the series. Any ID suggestion?

Thanks Karen and Vipin.

Thanks Lars. I think it's the right direction too.

You're right Rebecka, but I could not find the ID at the blog. Did you?

Looks like a sort of Dragon Lizard (Agamidae) to me. Just a guess.