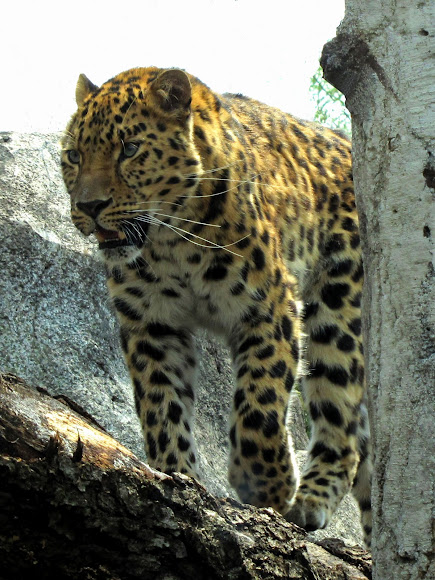 Amur leopards differ from other subspecies by a thick coat. They show the strongest and most consistent divergence in pattern. Leopards from the Amur river basin, the mountains of north-eastern China and the Korean peninsula have pale cream-colored coats, particularly in winter.

Amur leopards used to be found in northeastern China, probably in the south to Peking, and the Korean Peninsula. In the mid 20th century, their distribution in Russia was limited to the far south of the Ussuri region. The northern boundary commenced on the coast of the Sea of Japan at 44°N and ran south at a distance of 15–30 km (9.3–19 mi) from the coast to 43°10’N. There it turned steeply westward, north of the Suchan basin, then north to encompass the source of Ussuri River and two right bank tributaries in the upper reaches of the Ussuri. There the boundary turned westward toward the bank of Khanka Lake. In the 1950s, leopards were observed 50 km (31 mi) north of Vladivostok and in Kedrovaya Pad Nature Reserve. The association of Amur leopards with mountains is fairly definite. They are confined more to places where wild sika deer live or where deer husbandry is practised. In winter they keep to snowfree rocky slopes facing south.[4]

The Amur leopard (Panthera pardus orientalis) is a leopard subspecies native to the southwestern Primorye region of Russia, and is, as of 15 February 2012, classed as Critically Endangered. As of December 2011, there are 176 captive Amur leopards in zoos worldwide. This leopard is in the Minnesota Zoo.