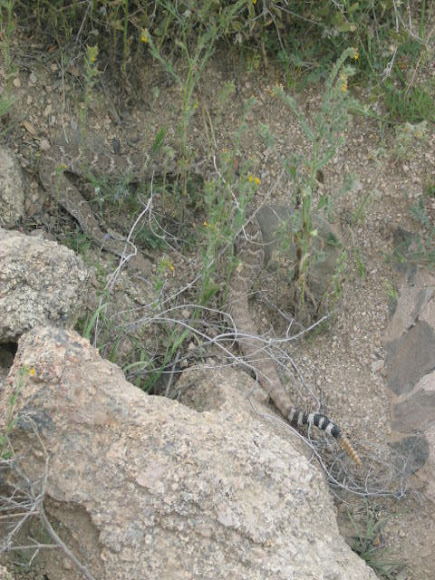 The diamond back is a heavy bodied snake with a triangular shaped head they are commonly 3-5 feet long. It has a diamond pattern back and black and white rings before the rattle at the bottom of the snake. An adaption the diamond back has is that they have heat sensing pads behind there nostrils that can tell the temperature on the something letting it know weather it is a predator or prey. The diamond back rattle snake lives among many different types of lizards and birds as well as roadrunners and coyotes. The rattlers skin is thick and tough protecting it from the sun as well it camouflages the snake. After the snake sheds its skin bugs will commonly come and eat it so they have a commensalism relationship.The gestation for the snake is usually 6-7 months (after sexual reproduction) and usually deliver about a dozen babies. The young only stay with the mother for a couple hours before going off to go find food. They are born immediately with the power of there venomous bite.

The western diamondback rattlesnake is found in central and western Arkansas, Oklahoma, Texas, southern and central New Mexico, southern and central Arizona, southern Nevada, and southeastern California. The south eastern parts of America and the northern part of Mexico. The rattle snacks diet consists of small rodents, rats, mice, gophers as well as lizards and other small animals. The snakes predators are eagles, hawks, coyotes, roadrunners, as well as horses, sheep, deer, and cows not because it will eat them but because they will trample the snake.

Please describe the habitat of THIS spotting under habitat. Thanks