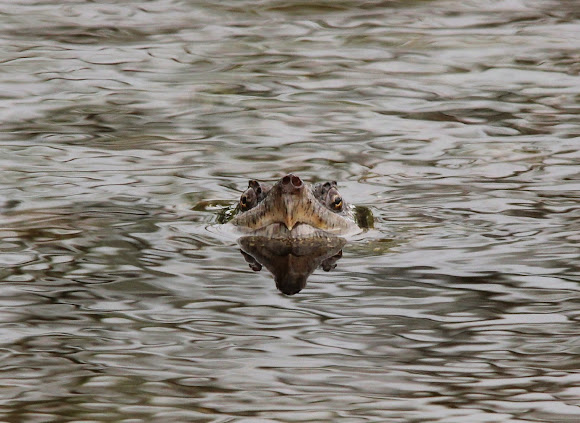 The alligator snapping turtle is characterized by a large, heavy head, and a long, thick shell with three dorsal ridges of large scales (osteoderms) giving it a primitive appearance reminiscent of some of the plated dinosaurs. They can be immediately distinguished from the Common Snapping Turtle by the three distinct rows of spikes and raised plates on the carapace, whereas the common snapping turtle has a smoother carapace. They are a solid gray, brown, black, or olive-green in color, and often covered with algae. They have radiating yellowpatterns around the eyes, serving to break up the outline of the eye and keep the turtle camouflaged. Their eyes are also surrounded by a star-shaped arrangement of fleshy filamentous "eyelashes."

Was running back to the car to get ahead of the approaching thunderstorm, and stopped to take this guy's picture. Sometimes the best shots, are the ones you're not looking for.