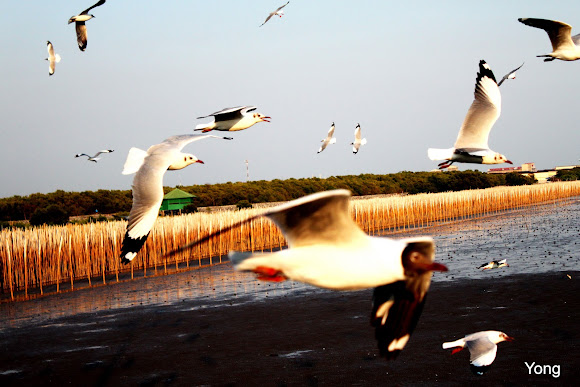 From Wikipedia, Larus canus is known in common gull. These are scientific classification of Larus canus, Kingdom: Animalia Phylum: Chordata Class: Aves Order: Charadriiformes Family: Laridae Species: L.canus Taxonomy: These are characteristics of common gull that features are small and mantle medium grey wingtips with extensive black and iris dark. Wingspan is 110–125 cm and mass is 290–480 g. The nets are on the ground or in a small tree. Usually three eggs are laid. They hatch after 24–26 days, with the chicks fledging after a further 30–35 days. Like most gulls, they are omnivores and will scavenge as well as hunt small prey. The global population is estimated to be about one million pairs; they are most numerous in Europe, with over half (possibly as much as 80-90%) of the world population.

I found it at Bangpoo, Samut Prakan, Thailand