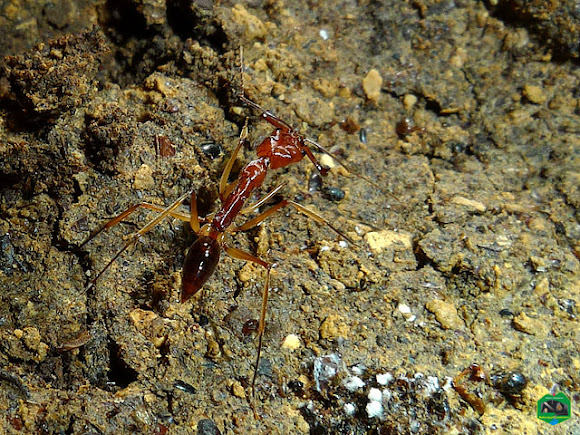 Spotted 15M in William's Cave, Brgy. Petal, Dasol, Pangasinan. Wiki - Commonly known as trap-jaw ants, species in Odontomachus have a pair of large, straight mandibles capable of opening 180 degrees. These jaws are locked in place by an internal mechanism, and can snap shut on prey or objects when sensory hairs on the inside of the mandibles are touched. The mandibles are powerful and fast, giving the ant its common name. The mandibles either kill or maim the prey, allowing the ant to bring it back to the nest. Odontomachus can simply lock and snap its jaws again if one bite is not enough, or to cut off bits of larger food. The mandibles also permit slow and fine movements for other tasks such as nest building and care of larvae.

Wiki - Trap-jaw ants of this genus have the fastest moving predatory appendages within the animal kingdom. One study of Odontomachus bauri recorded peak speeds of between 126–230 kilometres per hour (78–140 mph), with the jaws closing within just 130 microseconds on average. The peak force exerted was in the order of 300 times the body weight of the ant. The ants were also observed to use their jaws as a catapult to eject intruders or fling themselves backwards to escape a threat.

Lol misidentified it is anochetus ,a related ant species

What is PN's policy on posting public domain images that is informative and enhances a spotting? I'm thinking the following link would be useful in this spotting: http://en.wikipedia.org/wiki/File:Odonto.... The licensing info states: This image (or other media file) is in the public domain because its copyright has expired. This applies to Australia, the European Union and those countries with a copyright term of life of the author plus 70 years.