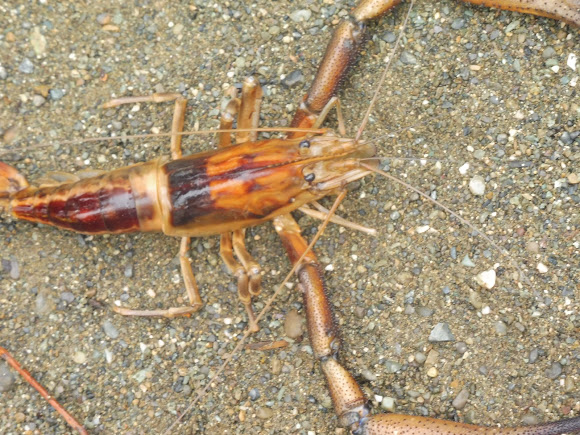 In size, it was roughly the length of a man's hand, presumably large for a crayfish. It had eight visible legs, the front two being extremely long and crowned with pinchers. It appeared to have three pairs of antenna. It had two tiny, black eyeballs. An orangeish-brown, hard shell protected its internal organs, much like an Iron-Man suit. Its legs each have a small claw at the end, useful for walking on the rock-bottom of the river, and for grabbing things like food. It has gills for breathing underwater. Its dark shell keeps it hidden among the rocks from predators. The warm water makes excellent conditions for the crayfish. It shares its habitat with various plants, small fish, other crayfish, and even insects. It lives in a symbiotic relationship with a group of cleaner-worms. The worms live on the shell of the crayfish and clean off dead tissue, parasites, and more. The gills of the crayfish are cleared and the animal stays healthy while the worms receive a food source, making this a mutualism. Generally, breeding happens in the spring, though in warmer water it can happen year-round. Through sexual reproduction, the male crayfish passes on its sperm to the female crayfish. The female holds her eggs under her tail for at least four weeks, but longer in colder water. Freshwater crayfish have larger eggs than ones in saltwater. Also, freshwater crayfish nurse their young for some time after birth, while ones living in saltwater do not.

It lived in a fresh water river in Cuba, trying to hide under a rock. It was a very calm, slow moving river almost to the point of no current at all. Crayfish live under rocks during the day, emerging from their rock refuge at night to feed on other fish or even other crayfish (alive or dead, they don't care), or aquatic plants. Predators of crayfish can be other crayfish, larger fish, otters, mink, and even raccoons.

It died very shortly after we took it out of the water and fifty people took pictures of and with it. When we put it back in the water to watch it swim away, and no movement came from its now lifeless body, we decided it would be much better off in our soup.

Very good spotting!
Pity about it's demise but put to a good use then.
Welcome to Project Noah.