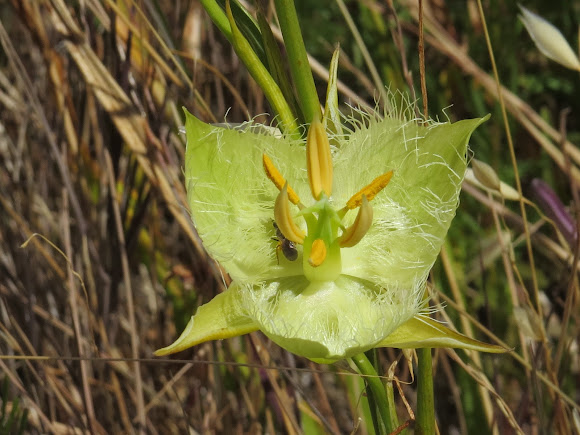 I have been visiting Ring Mountain annually since 2014 to see the Tiburon Mariposa Lily. This is the first time I have spotted an "albino." The flower's petals typically have purplish-brown coloration. See spotting: http://www.projectnoah.org/spottings/183...

Ring Mountain east of Mill Valley. There it occurs on a single serpentine outcrop in grasslands from 50–150 meters (160–490 ft) in elevation.

The plant was federally listed as a threatened species in 1995. It is considered threatened due to loss of surrounding habitat to recreational activities, to competition from invasive plant species, to its proximity to a dense population center, and to its confinement to a single population of plants. The population grows on land owned by the Marin County Open Space District, an area previously owned and preserved by The Nature Conservancy. It was first brought to the attention of science in 1971, and was described to science in 1973. It is protected along with a number of other rare serpentine soils endemics that grow on and around Ring Mountain. The plant has probably always been rare and limited to its current distribution on the Ring Mountain outcrop. A 1991 estimate placed the total population size at about 40,000 individuals. While the land is protected, the flora upon it are still vulnerable to events such as wildfires or drought, and to damage from off-leash dogs, hikers, cyclists, vandals, and wildflower collectors. Wikipedia

@misako
Understand that plants may also be affected - possessing chlorophyll, though lacking in other defining pigmentation. Interesting point and observation as to a possibility of a betalain deficiency.
- leukistic

Thanks for the comments @GCDruenn and @SarahWhitt! I'm learning a lot about plant pigmentation.

It may be a betalain deficiency.

Thanks @GCDruenn. I thought leucism at first, but it appears it may only apply to animals.