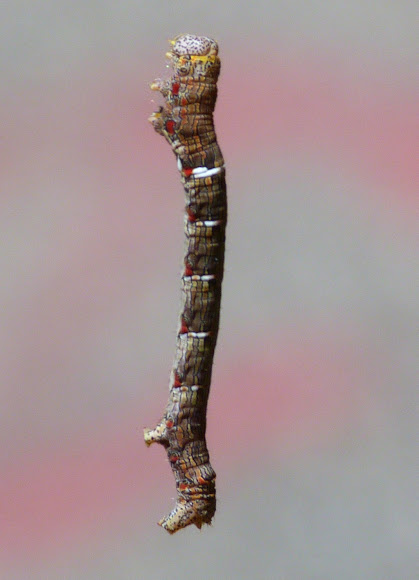 he name "Geometridae" ultimately derives from Latin geometra from Greek γεωμέτρης ("geometer, earth-measurer"). This refers to the means of locomotion of the larvae or caterpillars, which lack the prolegs of other Lepidopteran caterpillars in the middle portion of the body, with only two or three pairs at each end. Equipped with appendages at both ends of the body, a caterpillar will clasp with its front legs and draw up the hind end, then clasp with the hind end (prolegs) and reach out for a new front attachment - creating the impression that it is measuring its journey. The caterpillars are accordingly called loopers, spanworms, or inchworms after their characteristic looping gait.

While out on my break, I almost ran into an inchworm swinging in the breeze from its very thin (almost invisible) web strand ( or sometimes called a silk strand). Hard to focus on something that is not only swinging in the wind, but also climbing up at the same time.