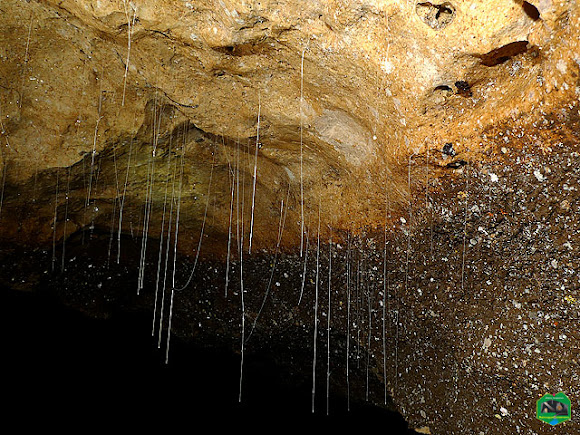 Spotted 15M from the entrance of Mid Cave, Baggao, Cagayan. Crops of each photos follow the original. Probably similar to spotting http://www.projectnoah.org/spottings/103...

Probably similar to the Australian glowworm that make sticky hanging snares to catch food during its larval stage. "Predaceous species kill their prey with an acid fluid (mostly oxalic acid) secreted by labial glands and deposited on the droplets of their webs."

Thanks Chun! The ceiling in this spotting was about 6 feet and in the other 4 feet (it was a duck-walk passage). There might be some of these there but you haven't seen them. The reference I linked above has about 20 keroplatids in Malaysia but not all might make snares like this though.

Nice spotting, the caves here does not have these.
How high is the cave ceiling in the photo ?