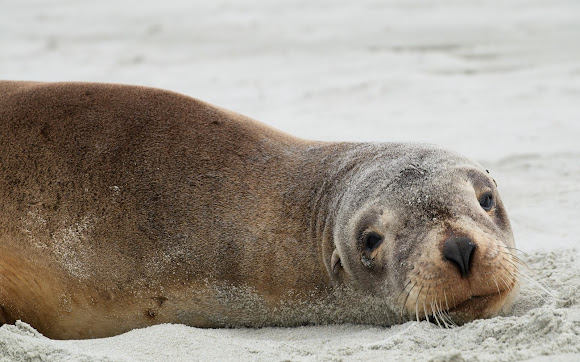 Known as Rāpoka in Māori, the New Zealand Sea Lion is endemic to New Zealand and one of the rarest Sea Lions in the world. According to the description I think these are both female Sea Lions. The females are "lighter in colour, predominantly creamy grey with darker pigmentation around their flippers." (Department of Conservation: https://www.doc.govt.nz/nature/native-an... )

Having a snooze on the sand (see pic 1) and wandering up the sand after hauling out (see pic 2) at Smails Beach, Dunedin.

It was a reasonably cool day with cloud cover. Bit of a breeze on arrival which picked up a bit and there was a light sprinkle when leaving the beach. When we walked onto the beach there was a Sea Lion hauling out right ahead of us (the one in pic 2). She proceeded to wander up the sand before laying on the ground and just rolling around, poking her nose into the sand, rolling around more until we moved on in the opposite direction. She disappeared after that and probably went for a little lay down. It wasn't until I was checking out the pics later that I noticed she was tagged. The cutie in pic 1 was just having a snooze on the sand with the lower third of her back covered in sand. It was such a pleasure to be in the presence of both of these beautiful critters. There is heaps of information on the Department of Conservation website about the New Zealand Sea Lions. According to the New Zealand Threat Classification System the New Zealand Sea Lion is considered Nationally Vulnerable. A great article in the New Zealand Geographic: https://www.nzgeo.com/stories/sea-lions-...

Thank you Mark. No, not a holiday. Made it here in the June bubble :D