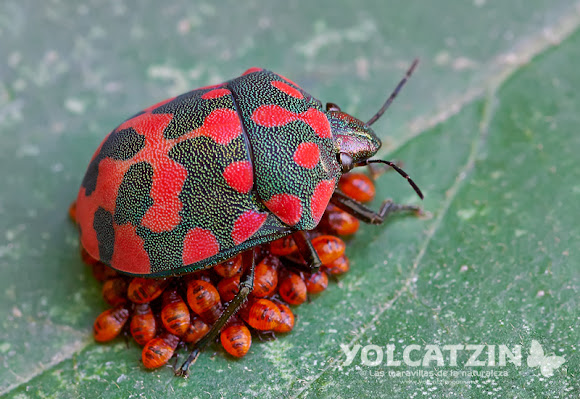 (Heteroptera, Scutelleridae). Pachycoris klugii (Burmeister 1835) is a common species in Mexico and Central America that in the past has been misidentified as P. torridus (Scopoli). It is an aposematic species that is brightly colored, with metallic green, and yellow, orange, or red spots. Extensive variation was observed in the color pattern of adults.

Their host plant is Cnidoscoulus multilobus (Euphorbiaceae) which is also known as “Bad woman” It is frequently found in clearings in mountain cloud forests or high jungles.

There have been several reports of maternal care in Heteroptera (Tallamy & Schaefer 1997), according to Wilson (1979) it corresponds to a subsocial behavior in which the parent offers shelter with its body, carries the nymphs around on its back or venter, or simply stands close by. Maternal behavior was related to egg parasitism, habitat and host plant phenology.

Oh look at this! It is too cute! Congratulations.

It's not eggs yunseong1... it's babies already hatched from eggs.

Beautiful photo! I cant believe those are her babies!!!
Congratulation for the pic/

It that the babies underneath?? That's so cool!

What is underneath that beetle?

Congrats on a nice SOTD!

Wonderful photo!
I found something similar when I was in Nicaragua. I'll have to post it so I can get it ID'd.

Awesome spotting and amazing photo! Congratulations on getting featured as "Spotting of the Day"! :-)

Thank you so much, it's very exciting for me this SOTW!!!

Congratulations EduardoAxelRecillasBautista on this SOTW!

Congrats on your SOTW...truly an amazing bug

Eduardo, this spectacular spotted red bug has been chosen as our Project Noah Rangers' Spotting of the Week! Congratulations! Thanks for sharing so many incredible photos with us and we look forward to seeing more through your lens. Congrats again!

she got to much babys

It is an honor to benominated for the Spotting of the Week. Thanks !!

What a wonderful spotting! There is another mission about parental care in general to which you can also add this spotting: http://www.projectnoah.org/missions/1116...