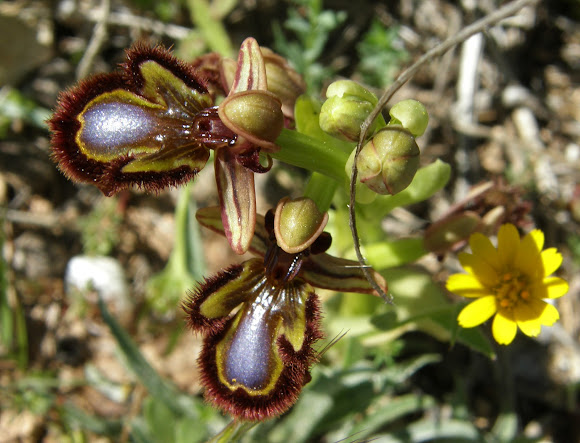 Is a wild orchid, monopodial and belonging to the subtribe Orchidinae. They reach a height of 25 to 30 cm. It is one of the popularly called "bee orchids." Most Ophrys orchids are dependent on a symbiotic fungus and can not be transplanted because of this. Each orchid has its own pollinator insect and is completely dependent on pollinators for this species survival. Mocked males are unlikely to return and even ignore plants of the same species. Because of this, only about 10% of the population becomes pollinated. This is sufficient to preserve the population of Ophrys, taking into account that each fertilized flower produces up to 12000 tiny seeds.

Is distributed throughout the Mediterranean (Spain, southern France and Corsica) and generally throughout Europe. In grasslands, scrublands, shrubs and forests.

Thanks for the new likes and comments :-)
There are amazingly beautiful orchids in the Mediterranean side of Spain during the spring. You can see morebeautiful examples in Isabela, Eulalia and PatriciaPi´s spottings :-)

The comment actually comes from Wikipedia and I just translated it. I was surprised that they learn so fast that they do not get mistaken again with the flowers. Poor flowers, no wonder why there are no more around.

Great information Marta and photos too...I love your comment about "mocked males" - I can just see them turning away frustrated and embarrassed never to return!!!
This is a perfect example of why flowers mimic insects. Thanks for sharing this.