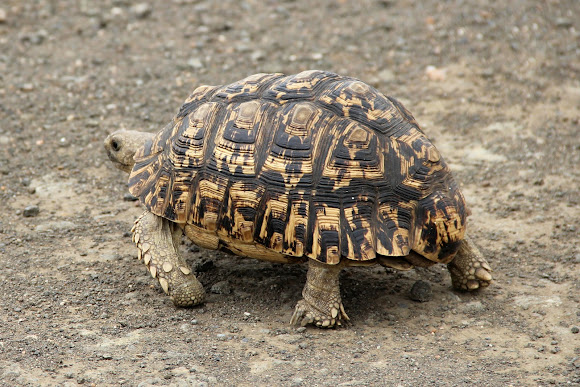 The Leopard tortoise (Stigmochelys pardalis) is a large and attractively marked tortoise found in the savannas of eastern and southern Africa, from Sudan to the southern Cape. It is the only member of the genus Stigmochelys, but in the past it was commonly placed in Geochelone instead. This chelonian is a grazing species of tortoise that favors semi-arid, thorny to grassland habitats, although some leopard tortoises have been found in rainier areas. In both very hot and very cold weather they may dwell in abandoned fox, jackal, or anteater holes. Leopard tortoises do not dig other than to make nests in which to lay eggs. Not surprisingly, given its propensity for grassland habitats, it grazes extensively upon mixed grasses. It also favors succulents and thistles, and (in captivity) the fruit and pads of the prickly pear cactus (Opuntia sp.) (cactus are New World plants not native to Africa). The African Leopard Tortoise typically lives 80 to 100 years. (https://en.wikipedia.org/wiki/Leopard_to...)