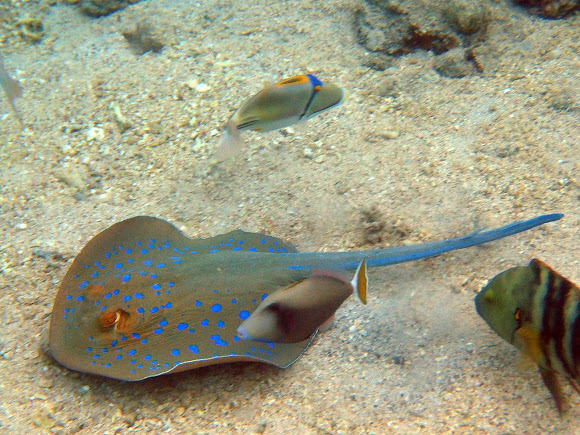 The bluespotted ribbontail ray (Taeniura lymma) is a species of stingray in the family Dasyatidae. Found from the intertidal zone to a depth of 30 m (100 ft), this species is common throughout the tropical Indian and western Pacific Oceans in nearshore, coral reef-associated habitats. It is a fairly small ray, not exceeding 35 cm (14 in) in width, with a mostly smooth, oval pectoral fin disc, large protruding eyes, and a relatively short and thick tail with a deep fin fold underneath. It can be easily identified by its striking color pattern of many electric blue spots on a yellowish background, with a pair of blue stripes on the tail. At night, small groups of bluespotted ribbontail rays follow the rising tide onto sandy flats to root for small benthic invertebrates and bony fishes in the sediment. When the tide recedes, the rays separate and withdraw to shelters on the reef. Reproduction is aplacental viviparous, with females giving birth to litters of up to seven young. This ray is capable of injuring humans with its venomous tail spines, though it prefers to flee if threatened. Because of its beauty and size, the bluespotted ribbontail ray is popular with private aquarists despite being poorly suited to captivity. The International Union for Conservation of Nature (IUCN) has listed this species as Near Threatened, as it faces widespread habitat degradation and intensive fishing pressure throughout its range. While timid and innocuous towards humans, the bluespotted ribbontail ray is capable of inflicting an excruciating wound with its venomous tail spines. Its attractive appearance and relatively small size has resulted in its being the most common stingray found in the home aquarium trade. However, it seldom fares well in captivity and very few hobbyists are able to maintain one for long. Many specimens refuse to feed in the aquarium, and even seemingly healthy individuals often inexplicably die or stop feeding. The bluespotted ribbontail ray is utilized as food in East Africa, Southeast Asia, and Australia; it is captured intentionally or incidentally using gillnets, longlines, spears, and fence traps. (https://en.wikipedia.org/wiki/Bluespotte...)

Widespread in the nearshore waters of the tropical Indo-Pacific region, the bluespotted ribbontail ray has a range that extends around the periphery of the Indian Ocean from South Africa to the Arabian Peninsula to Southeast Asia, including Madagascar, Mauritius, Zanzibar, the Seychelles, Sri Lanka, and the Maldives. It is rare in the Persian Gulf and Gulf of Oman. In the Pacific Ocean, this species is found from the Philippines to northern Australia, as well as around numerous Melanesian and Polynesian islands as far east as the Solomon Islands. Rarely found deeper than 30 m (100 ft), the bluespotted ribbontail ray is a bottom-dwelling species that frequents coral reefs and adjacent sandy flats. It is also commonly encountered in the intertidal zone and tidal pools, and has been sighted near seagrass beds. Every summer, considerable numbers of bluespotted ribbontail rays arrive off South Africa. (https://en.wikipedia.org/wiki/Bluespotte...)

Yaniv and Sarit Wainer 6 years ago

yunseong1 - its tail is venomous (but not deadly) to humans, but it's rare that a ray will sting when threatened - it usually flees. I was snorkeling when I spotted this one about 2 meters below me.

That looks dangerous.That must be hard to get the picture.