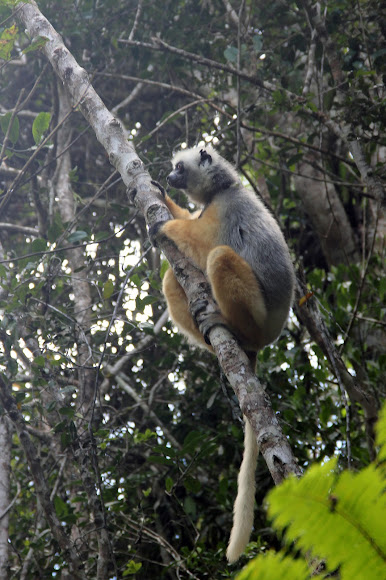 P. diadema is readily distinguished from all the other lemur species by its characteristic markings and large physical size. Its entire coat is moderately long, silky and luxuriant. The long white fur encircling his muzzle and covering its cheeks, forehead and chin, engenders the "diadem" or crown appearance. Its eyes are a reddish-brown, the muzzle is short, and the face is bare with colourisation of darkish gray to jet black. The crown fur is also quite black and often extends to the nape of the neck. The upper back and shoulder fur are slate grayish, although the lower back is lighter in colour attaining a silvery quality. Flanks and tail are a paler gray, sometimes even white, as is the case for ventral fur. Hands and feet are entirely black, while arms, legs and base of tail are a yellowish-golden hue. Only the male is endowed with a large cutaneous gland at the exterior center of the throat, which feature is typically reddish-brown. (https://en.wikipedia.org/wiki/Diademed_s...)

The diademed sifaka is one of the mostly widely distributed member of the Propithecus genus, although definitive mapping of its range has not been conducted. Occurrence is at altitudes of 200 to 800 metres (656 to 2,624 feet) throughout much of the eastern Madagascar lowland forests and altitudes 800 to 1,550 metres (2,624 to 5,084 feet); in portions of the Madagascar subhumid forests. These two biomes have been designated as a Global 200 ecoregion, one of the world's most significant regions for conservation. Geographically the range extends to at least the Mananara River in the north to the Onive and Mongoro Rivers in the south. One set of researchers has recorded a clinal variation between Propithecus diadema and Propithecus edwardsi in the extreme southern portion of the range. As with all Indriidae, this species and its entire genus have evolved on the island of Madagascar independent of other mainland African species. (https://en.wikipedia.org/wiki/Diademed_s...)