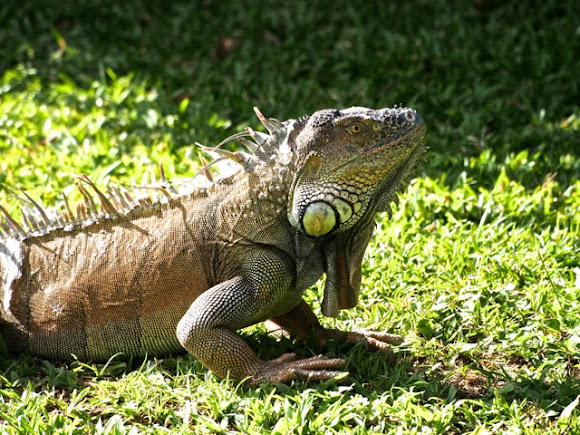 The green iguana or common iguana (Iguana iguana) is a large, arboreal, mostly herbivorous species of lizard of the genus Iguana native to Central, South America, and the Caribbean. Usually, this animal is simply called the iguana. The green iguana ranges over a large geographic area, from southern Brazil and Paraguay as far north as Mexico and the Caribbean Islands. They are very common throughout Puerto Rico, where they are collaquially known as "Gallina de palo" and considered as an invasive species introduced from South America. Agile climbers, Iguana iguana can fall up to 50 feet (15 m) and land unhurt (iguanas use their hind leg claws to clasp leaves and branches to break a fall). During cold, wet weather, green iguanas prefer to stay on the ground for greater warmth. When swimming, an iguana remains submerged, letting its four legs hang limply against its side. They propel through the water with powerful tail strokes Despite their name, Green Iguanas can come in different colors. In southe

Seen in the grounds of Mawamba National Park.

I think this is the last of my Costa Rican spottings. Now onto something else...

Very nice. And, look forward to your "something else...."