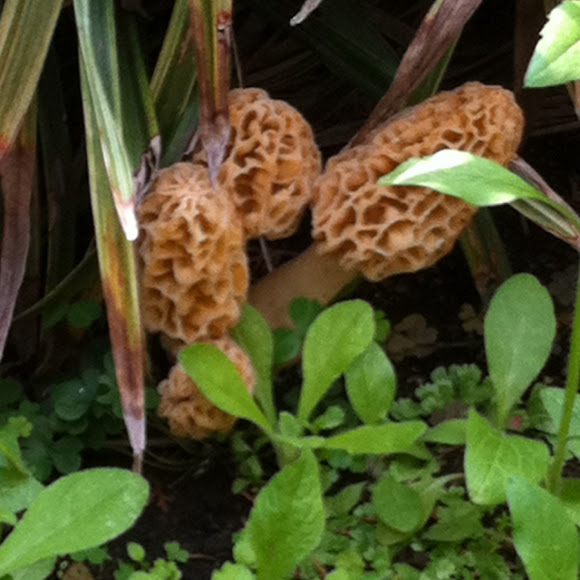 Morchella, the true morels, is a genus of edible mushrooms closely related to anatomically simpler cup fungi. These distinctive mushrooms appear honeycomb-like in that the upper portion is composed of a network of ridges with pits between them. The ascocarps are prized by gourmet cooks, particularly for French cuisine. Commercial value aside, morels are hunted by thousands of people every year simply for their taste and the joy of the hunt. Morels have been called by many local names; some of the more colorful include dryland fish, because when sliced lengthwise then breaded and fried, their outline resembles the shape of a fish; hickory chickens, as they are known in many parts of Kentucky; and merkels or miracles, based on a story of how a mountain family was saved from starvation by eating morels (the spelling of the word "merkel" reflects the pronunciation of the word "miracle" in the Appalachian dialect common to the south).[citation needed] In parts of West Virginia, they are known as "molly moochers." Other common names for morels include sponge mushroom. Genus Morchella is derived from morchel, an old German word for mushroom, while morel itself is derived from the Latin maurus meaning brown.

Yellow morels (Morchella esculenta) are more commonly found under deciduous trees rather than conifers, and black morels (Morchella elata) can be found in deciduous forests, oak and poplar.Deciduous trees commonly associated with morels in the northern hemisphere include ash, sycamore, tulip tree, dead and dying elms, cottonwoods and old apple trees (remnants of orchards). The fruiting of yellow morels in Missouri, USA, was found to correlate with warm weather, precipitation, and tree species, and most usually in the springtime. Morels are rarely found in the vicinity of most common poisonous mushrooms such as the sulphur tuft and fly agaric (April-May time frame), but can occur alongside "false morels" (Gyromitra sp.) and "elfin saddles" (Verpa sp.). Morels in western North America are often found in coniferous forests, including trees in the genera Pinus, Abies, Larix, and Pseudotsuga, as well as in cottonwood riparian forests.