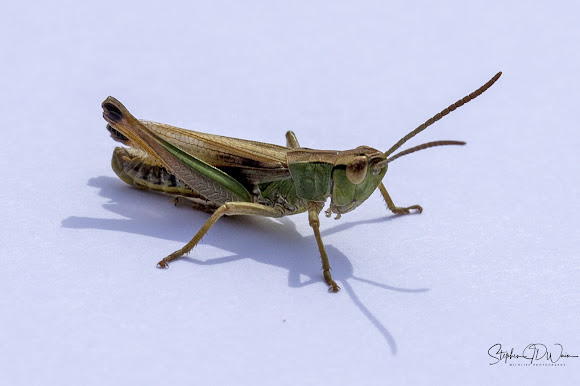 Common field grasshoppers belong to an order of insects called the Orthoptera which includes grasshoppers, crickets and locusts. They are fairly large grasshoppers, typically between 18-24 mm (c. 0.7-1 inch) long, and while they are generally considered to be a brown grasshoppers, they come in a bewildering array of colours that include greens, browns and purples; generally with variable degrees of black, brown or grey mottled markings. The variability in colouration and markings means that accurate identification of grasshopper species in the field requires careful examination of the specific shape and markings of particular body parts. The common field grasshopper, for example, has an inflected and angular pronotum (the frontmost section of the animal’s thorax) with black, wedge-shaped markings that don’t reach all the way to the back edge. It also has relatively few “stridulatory” pegs on its hind legs (the protrusions that, when rubbed against the toughened veins of the forewings, allow the grasshopper to produce its characteristic song).

Common field grasshoppers are strong fliers that are particularly active in warm weather. They prefer dry, grassy habitats, and are often common on roadside verges, parkland and waste ground.

I almost trod on this one as he was walking across the garden. I moved him onto a white card for a photo before he jumped to the bush