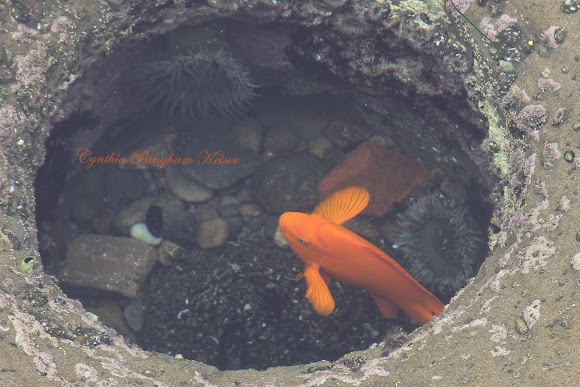 This brilliant orange fish had the unfortunate bad luck of being stuck in a hole during low tide. "Garibaldis grow up to 38 cm (15 in) in length. Juvenile Garibaldi are not as bright in color, but have iridescent blue spots which they lose as they become an adult fish. Adult Garibaldis tend to have a more opaque tail and dorsal fin." - Wikipedia

Sandstone hole at tidepools. "It is frequently seen off Santa Catalina Island, California and in La Jolla Cove (San Diego), where it is locally very common. (It's) native to the North-Eastern subtropical parts of the Pacific Ocean, ranging from Monterey Bay, California, to Guadalupe Island, Baja California. They live from very shallow water to depths of up to 30 meters (100 ft), usually in association with reefs, and typically over rocky sea-bottoms" - Wikipedia

"This is the official marine state fish of California and is protected in California coastal waters. The common name refers to the Italian revolutionary Giuseppe Garibaldi, who famously wore a bright red shirt, as did many of his followers." - Wikipedia

Thank you Reza, QWMom and Yuko! Hopefully the seal was just admiring its beauty :)

Very nice! I hope the seal is not saying "lunch!"

:) I was tempted to have #5 as #1 but thought I should show off the Garibaldi more. I'm glad you looked at the whole series and saw the last image. It's my favorite too.

Thank you katy, Yasser and Sachin. The last is my favorite as well :)

Hopefully, he made it until high tide! That last shot is really amazing.

Nice shot..especially the last one:)

I was shocked to see this! What are the odds?

Thank you Apple. I was up on a Jetty and couldn't get down to it. Hopefully the seal doesn't eat it (previous spotting).

Too bad he was stuck but great shots!