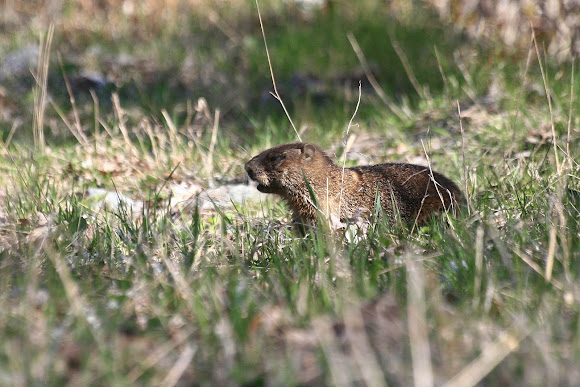 The groundhog is the largest sciurid in its geographical range, typically measuring 40 to 65 cm (16 to 26 in) long (including a 15 cm (6 in) tail) and weighing 2 to 4 kg (4 to 9 lb). In areas with fewer natural predators and large amounts of alfalfa, groundhogs can grow to 80 cm (30 in) and 14 kg (31 lb). Groundhogs are well adapted for digging, with short but powerful limbs and curved, thick claws. Unlike other sciurids, the groundhog's spine is curved, more like that of a mole, and the tail is comparably shorter as well—only about one-fourth of body length. Suited to their temperate habitat, groundhogs are covered with two coats of fur: a dense grey undercoat and a longer coat of banded guard hairs that gives the groundhog its distinctive "frosted" appearance.

The groundhog (Marmota monax), also known as a woodchuck, whistle-pig, or in some areas as a land-beaver, is a rodent of the family Sciuridae, belonging to the group of large ground squirrels known as marmots. Other marmots, such as the yellow-bellied and hoary marmots, live in rocky and mountainous areas, but the woodchuck is a lowland creature. It is widely distributed in North America and common in the northeastern and central United States. Groundhogs are found as far north as Alaska, with their habitat extending southeast to Alabama.[2]