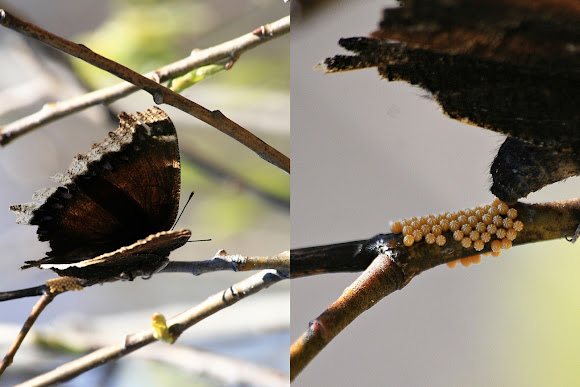 Nymphalis antiopa has a wingspan of 62–75 mm. The upper side of the butterfly is colored in a very dark red, with a bright, yellowish border around the wings. There is a darker band with bright blue spots between the border and the dark red inner side. Sexes are similar, although the females are slightly larger.

Nymphalis antiopa, known as the Mourning Cloak in North America and the Camberwell Beauty in Britain, is a large butterfly native to Eurasia and North America. See also Anglewing butterflies. The immature form of this species is sometimes known as the spiny elm caterpillar. Other older names for this species include Grand Surprise and White Petticoat. A powerful flier, this species is sometimes found in areas far from its usual range during migration. It is also the State Insect of Montana.