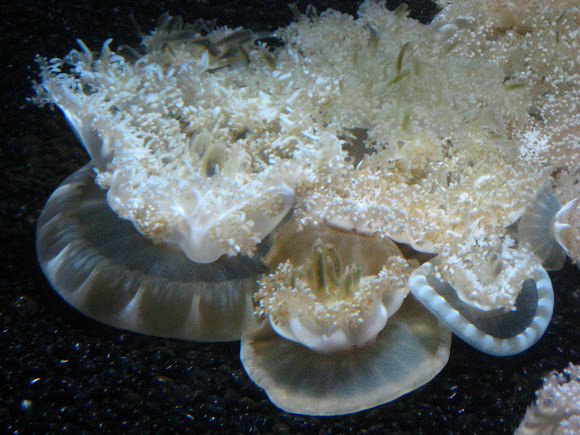 Jellyfish (also known as jellies or sea jellies or a stage of the life cycle of Medusozoa) are free-swimming members of the phylum Cnidaria. Medusa is another word for jellyfish, and refers to any free-swimming jellyfish life stages among animals in the phylum. Jellyfish have multiple morphologies that represent cnidarian classesincluding the Scyphozoa (over 200 species), Staurozoa (about 50 species), Cubozoa (about 20 species), and Hydrozoa (about 1000–1500 species that make jellyfish and many more that do not). Jellyfish are found in every ocean, from the surface to the deep sea. Some hydrozoan jellyfish, or hydromedusae, inhabit freshwater; freshwater jellyfish are less than an inch (2.5 cm) in diameter, are colorless and do not sting. Large, often colorful, jellyfish are common in coastal zones worldwide. Jellyfish have roamed the seas for at least 500 million years, and possibly 700 million years or more, making them the oldest multi-organ animal. In its broadest sense, the term jellyfish may also generally refer to members of the phylum Ctenophora. Although not closely related to cnidarian jellyfish, ctenophores are also free-swimming planktonic carnivores, are generally transparent or translucent, and exist in shallow to deep portions of all the world's oceans. More specific names for the groups of Cnidarian jellyfish are scyphomedusae, stauromedusae, cubomedusae, and hydromedusae. These may relate to an entire orderor class. Wikipedia