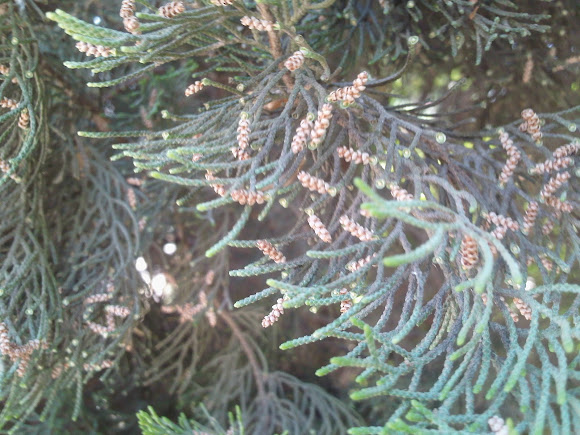 Cupressus sempervirens, the Mediterranean Cypress (also known as Italian, Tuscan, or Graveyard Cypress, or Pencil Pine) is a species of cypress native to the eastern Mediterranean region, in northeast Libya, southeast Greece (Crete, Rhodes), southern Turkey, Cyprus, Northern Egypt, western Syria, Lebanon, Israel, Malta, Italy, western Jordan, and also a disjunct population in Iran. It is a medium-sized evergreen tree to 35 m (115 ft) tall, with a conic crown with level branches and variably loosely hanging branchlets.[1] It is very long-lived, with some trees reported to be over 1,000 years old. The foliage grows in dense sprays, dark green in colour. The leaves are scale-like, 2–5 mm long, and produced on rounded (not flattened) shoots. The seed cones are ovoid or oblong, 25–40 mm long, with 10-14 scales, green at first, maturing brown about 20–24 months after pollination. The male cones are 3–5 mm long, and release pollen in late winter. It is moderately susceptible to cypress canker, caused by the fungus Seiridium cardinale, and can suffer extensive dieback where this disease is common. The species name sempervirens comes from the Latin for 'evergreen'.

In classical antiquity, the cypress was a symbol of mourning and in the modern era it remains the principal cemetery tree in both the Muslim world and Europe. In the classical tradition, the cypress was associated with death and the underworld because it failed to regenerate when cut back too severely. Athenian households in mourning were garlanded with boughs of cypress.[4] Cypress was used to fumigate the air during cremations.[5] It was among the plants that were suitable for making wreaths to adorn statues of Pluto, the classical ruler of the underworld.