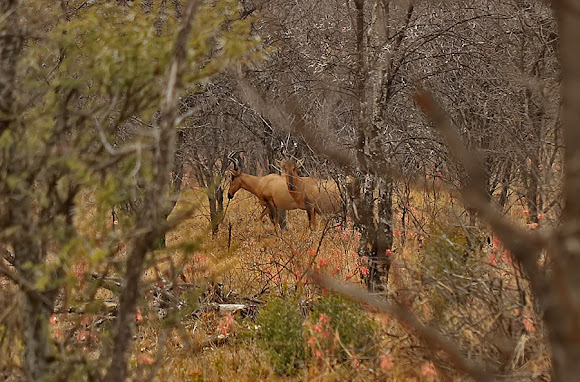 The hartebeest (Alcelaphus buselaphus) is an African species of grassland antelope, first described by Peter Simon Pallas in 1766. Adults stand just over 1 m (3.3 ft) at the shoulder. Males weigh 125 to 218 kg (276 to 481 lb), and females are slightly lighter. The coat colour varies between subspecies, from the sandy coat of the western hartebeest to the almost black coat of the Swayne's hartebeest. Both sexes have horns; these grow 45–70 cm (18–28 in) long, with the shape varying greatly between subspecies. Hartebeest live between 11 and 20 years in the wild, and up to 19 in captivity. Hartebeest are social animals that form herds of 20 to 300 individuals. Generally calm in nature, hartebeest can be ferocious when provoked. Their diets consist mainly of grasses, with small amounts of Hyparrhenia grasses and legumes throughout the year. The time of mating varies seasonally, and depends on both the subspecies and the population. Hartebeest are sexually mature at one to two years of age. After a gestation period of eight months, one offspring is born. The hartebeest inhabits savannas, woodlands, and open plains.