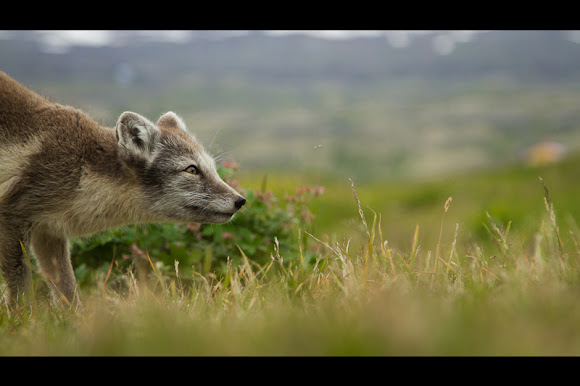 The Arctic Fox is the only native land mammal to Iceland. It came to Iceland at the end of the last ice age, walking over the frozen sea.

The Arctic Fox has a circumpolar range, meaning that it is found throughout the entire Arctic, including the outer edges of Greenland, Russia, Canada, Alaska, and Svalbard, as well as in Subarctic and alpine areas, such as Iceland and mainland alpine Scandinavia.

Photo taken in Hornvik, in the Hornstrandir nature reserve in the West Fjords of Iceland. More photos on my Flickr: www.flickr.com/haukurr.

Very nice encounter Haukur, thanks for sharing it with us!

Congratulations Haukur! Beautiful! Iceland is number one on my 'Bucket list? I believe the flora is amazing there

Congratulations on your amazing pics.

Congrats on a well deserved spotting of the day!

Hi Haukar! This great series has been selected as Spotting of the Day! Congratulations for the recognition and thanks for the incredible arctic fox submissions.

"The arctic fox is the only native land mammal to Iceland. It arrived at the end of the last ice age, walking over the frozen sea."