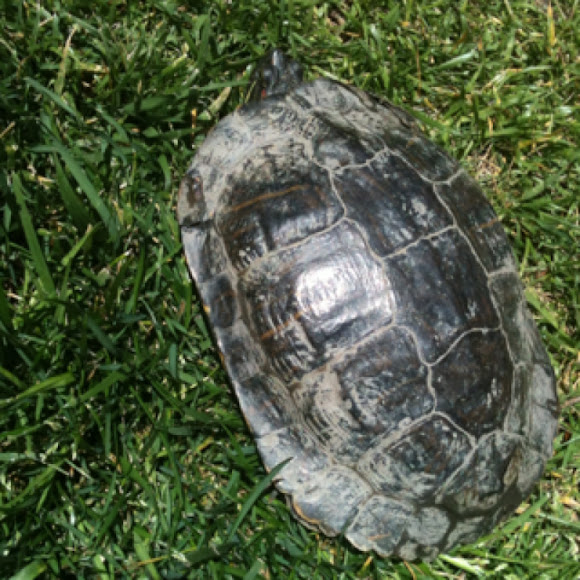 This medium-size turtle gets its name from the broad reddish stripe behind its eyes. The undersurface of its chin is rounded and there is a V-shaped notch at the front of its jaw that is not flanked by cusps. Most of its body is dark olive green with thin yellow green stripes and bars on the top of its shell (carapace), legs and face. The green coloration of the carapace on a juvenile becomes masked by black pigmentation with age, making older individuals, especially males, appear almost black with no visible markings. In fact, these mature males are so different in appearance that they once were considered a separate species. The carapace is smooth, oval in shape and flattened with a weak keel. The bottom of its shell (plastron) is primarily yellow with a dark marking on the center of each scute. All the subspecies of sliders have webbed feet that aid this aquatic turtle in swimming. They average in length from 5 to 8 inches with a record of 11.38 inches. The male is usually smaller than the female with a much longer and thicker tail. The cloacal opening of the male is beyond the edge of the carapace while the female’s opening is at or under the rear edge of the carapace. Males have longer, curved claws that they use in courtship/mating.

Red-eared sliders inhabit most freshwater systems such as lakes, streams, swamps, ponds and rivers. They prefer the quiet waters of marshes, sluggish rivers and ponds that have soft bottoms with numerous basking sites and an abundance of aquatic vegetation. They are faithful to home ranges, leaving only to search for mates, nest and hibernate. Even if the waterways in their home ranges begin to evaporate during the summer, the sliders remain. Only after the waterway is completely dry and conditions become unbearable, will they migrate to better areas.

When you're into a topic, you develop friends who are also into it. I'm into herps (amphibians and reptiles) so I have herp friends/colleagues. :-)

I don't know of any agencies that need to know about the sliders. I'm sure there are plenty of grad students and biologists who are tracking their whereabouts.

Herp friends...lol. Should I have reported the turtle? Or taken it to a rescue or something to help prevent reproduction of the invaders?

My herp friends and I refer to the red-eared slider as "the cockroach of the reptile world" because they've moved across the globe (through no fault of their own) and have taken hold of many different ecosystems.

Yeah that seems to happen all over the world now a days. But thanks. I had to move the little guy was headed into a sidewalk of visiting school kids. So I put him by the pond XD

Nice spotting, Leah. Sorry it's in California, where it's out-competing your native turtles.