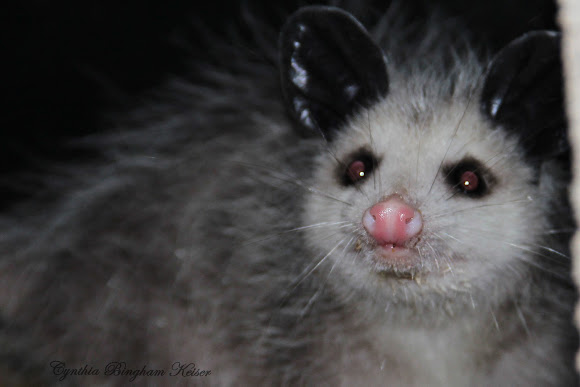 This series and video is of a juvenile about 38 cm long including the tail. The fifth image is of another Opossum that was with this one and is injured. The last image shows how Opossums use their tail to descend. "They measure 13–37 inches (35–94 cm) long from their snout to the base of the tail, with the tail adding another 8.5–19 inches (21.6–47 cm). Weight for males ranges from 1.7 to 14 pounds (0.8–6.4 kg) and for females from 11 ounces to 8.2 pounds (0.3–3.7 kg). They are one of the world's most variably sized mammals, since a large male from northern North America weighs about 20 times as much as a small female from the tropics. Their coats are a dull grayish brown, other than on their faces, which are white. Opossums have long, hairless, prehensile tails, which can be used to grab branches and carry small objects. They also have hairless ears and a long, flat nose. Opossums have 50 teeth, the most out of any North American mammal, and opposable, clawless thumbs on their rear limbs." - Wikipedia

Avocado tree and duck feeder in backyard. "The Virginia opossum is found throughout Central America and North America east of the Rockies from Costa Rica to southern Ontario." - Wikipedia

Thank you freelancing. I too think this youngster is cute. There are now three of them in our yard that like to feed on leftover duck food at night.

Very cute specimen. I've never found possums to be that cute - but on rare occasion, there is one that is particularly charming - and this is one of them.

Thank you all. I was fortunate to have a brave and mellow juvenile that let me get about 6 feet away. I wasn't going to push my luck further! I usually just see the eyes reflecting from the trees.

nice series and explanation about what we are seeing!