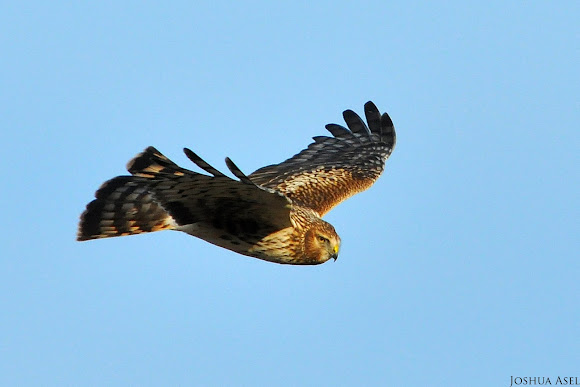 Norther Harriers are sexually dimorphic, which means they are distinctively different in plumage between male and female. The juveniles are cinnamony-pumpkin orange in color and then they turn into either light brown with heavy spotting on top and dark brown on top (female), or white on the bottom with a blueish silver/gray on top (male). Females out number males 10 to 1. They also have half facial disks, similar to an owl, so they can hunt by hearing as much as seeing while they fly very low and swift to the ground.

Always fun to watch and, in my experience, the most obvious and somehow sneakiest of all flyers. Easy to spot, but once they disappear behind a hill, you never know what direction they are going to come from next as they fly back and fourth between patches of land.

Well that's a surprise. I'm glad they're making their ways back! Thanks Beaker :)

I love Northern Harriers! They definitely have erratic flight patterns, which is fun to watch. They are threatened in Illinois, but in the past two years we have had a couple returning to our area in the spring, perhaps migrating through. Great photos Joshua!