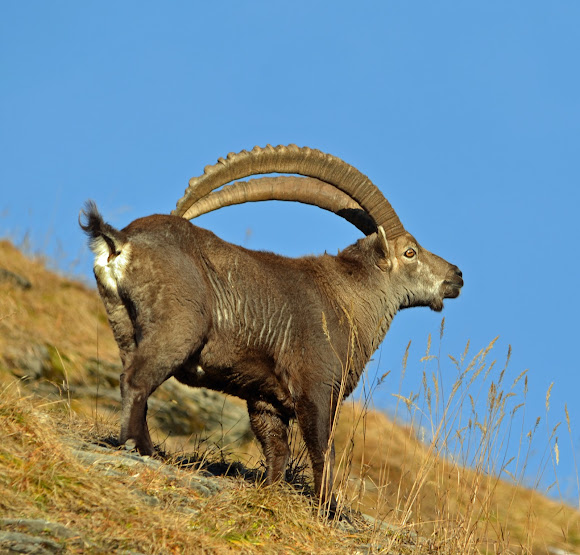 With his neck stretched out and his tail raised, this impressive male Alpine ibex shows all the signs of rut. Males can weigh up to about 115 kilograms (258 lb), and have large, backwards-curving, horns with numerous ridges along their length growing with age to up 98 cm (39 in). Extirpated by hunting from most alpine areas in the 19th century, the Alpine ibex was reintroduced to parts of its historical range and is now thriving.

Rocky slopes with grass above tree line, alt. 1900 m ASL. The habitat is shown in the last shot.

These two males were spotted together, the second one (picture 5) being noticeably younger as shown by his horns.The rut period lasts for about 6 weeks from about early December to mid-January. During this time, male herds break up into smaller groups that search for females. Spectacular fights to determine male ranking can be observed during this period. Rarely violent, the shock of horns can nevertheless be heard far away.

I missed this one at the time of posting - but gorgeous.

Congrats DanielePralong, your majestic Alpine ibex has made the top 10 mammal spottings in the '2015 Best Wildlife Photo' mission! Rangers are voting on the top 10 mammal spottings, and the top 3 will be announced on February 6th. The top 3 spottings will be commented on here on the site, but make sure you keep a look out on our Facebook app page for the announcement as well! Congratulations on making the top 10! https://www.facebook.com/projectnoah

Thank you so much Robert!

What a great set of images. Thank you for sharing them.
Robert

Great photos Daniele... and belated congrats on the SOTD!!

Thank you Daniele :) I have been travelling...have been home nearly one week after having a break in Dominica and St Lucia for six weeks! Had a ball trying to photograph birds :D

Thank you Desmond, and thank you armadeus.4! Nice to see you around again armadeus.4, I see you've been travelling!

A belated congratulations on your SOTD Daniele! That is a splendid ibex right there. Thank you for the info and for sharing :)

Great Shots! Of such a Fabulous Animal! And Thanks for sharing!

Thanks Bhagya, Satyen, Maria and Juan! Maria I also like the way the younger one "strutts" his stuff, but he stands little chance. Research carried out on the population these guys belong to shows that reproductive success in male Alpine ibex is heavily biased towards older, dominant males that monopolize access to receptive females.

Congratulations on your series and SOTD, Daniele! The fifth photo is also very nice where he really looks like he is "struttin' his stuff"!

Thanks Dilan, Neil and Frederic!

A fine looking Ibex, Daniele. Congrats on your much-deserved SOTD :-)

Thank you Caleb! Hema, the young ones have quite a different silhouette and have very short horns, and sexes can't be differentiated before the age of 2. The females go to high secluded places to give birth and the young ones are quite hard to photograph. You can see pictures of young ones in the second reference I included.

lovely horns!! Such a cute animal. Are the little ones the same looking?

Belated congrats on your SOTD, danielle!