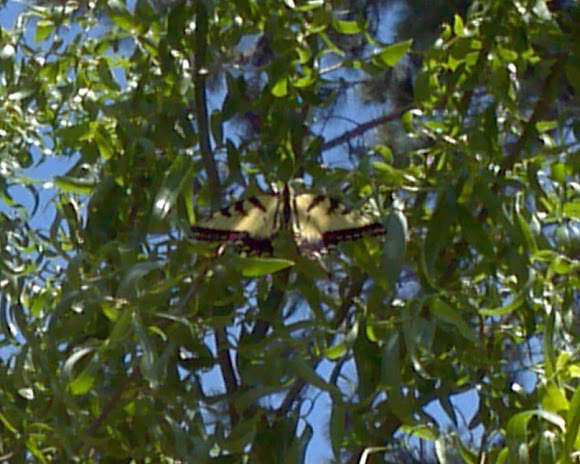 The wingspan ranges from 3.1 to 5.5 in. Males are yellow with four black tiger stripes on each front wing. The outer edge of the front wing is black with a row of yellow spots. The veins are marked with black. The back wing is black with yellow spots along the edge.| Females are dimorphic. The yellow morph differs from the male in having a blue area on the hind wing. In the dark morph, the areas that are normally yellow are replaced with dark gray or black. The bluish area on the back wing has one row of orange spots. A shadow of the tiger stripes can be seen on the underside of some dark females.

The Eastern Tiger Swallowtail is found in the eastern United States from southern Vermont to Florida west to eastern Texas and the Great Plains. It can be found almost anywhere deciduous forests occur. Common habitats include woodlands, fields, rivers, creeks, roadsides, and gardens.

It was found at a wet grass-less patch of land in the back yard, then it took flight into the corkscrew willow.

Spotted by a stud ent at Homeschool