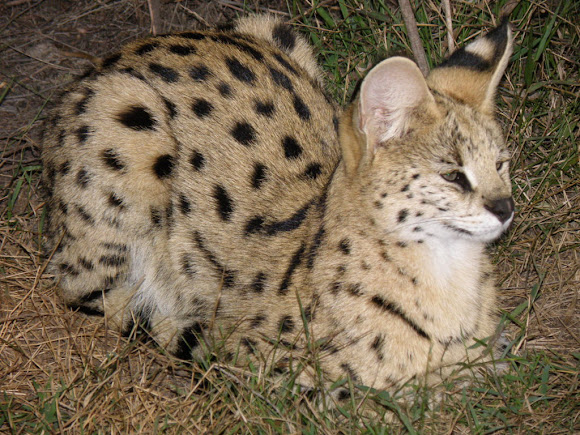 The serval Cat.- Leptailurus serval or Caracal serval, known in Afrikaans language as Tierboskat, "tiger-forest-cat". The serval is a medium-sized cat. It is a strong yet slender animal, with long legs and a fairly short tail. The head is small in relation to the body, and the tall, oval ears are set close together. The pattern of the fur is variable. Usually, the serval is boldly spotted black on tawny, with two or four stripes from the top of the head down the neck and back, transitioning into spots. The "servaline" form has much smaller, freckled spots, and was once thought to be separate species. The backs of the ears are black with a distinctive white bar. In addition, melanistic servals are quite common in some parts of the range, giving a similar appearance to the "black panther" (melanistic leopard).[4] Servals have the longest legs of any cat.( relative to body size) for jumping, which also help it achieve a top speed of 80 kilometres per hour (50 mph).

The serval is native to Africa, where it is widely distributed south of the Sahara. It was once also found in Morocco, Tunisia, and Algeria,[4] but may have been extirpated from Algeria and only remains in Tunisia because of a reintroduction programme.[2] Its main habitat is the savanna, although melanistic individuals are more usually found in mountainous areas at elevations up to 3,000 metres (9,800 ft).

Nineteen subspecies were recognized in Mammal Species of the World,[1] but some authorities treat several of these as synonyms (a few have even treated the serval as monotypic).[8]

This was in a wild cat reserve at Knysna , South Africa

Wonderful; I love servals. Could you tell us something about where you spotted it?