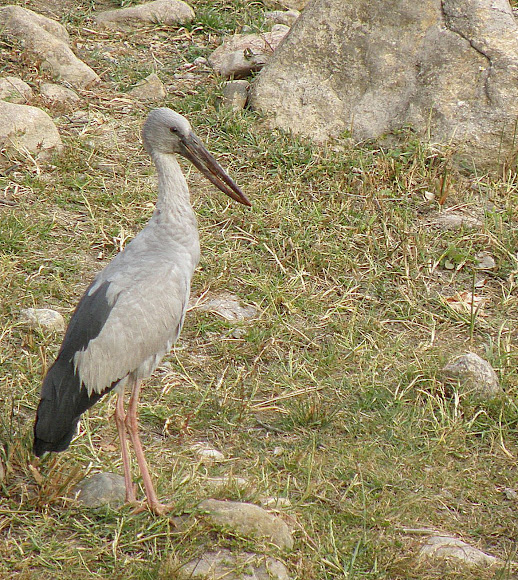 The Asian Openbill or Asian Openbill Stork (Anastomus oscitans) is a large wading bird in the stork family Ciconiidae. The Asian Openbill Stork is predominantly white with glossy black wings and tail having a green or purple sheen. The name is derived from the distinctive gap formed between the recurved lower and arched upper mandible of the beak in adult birds. Young birds do not have this gap. The mantle is black and the bill is horn-grey. At a distance, they can appear somewhat like a White Stork or Oriental Stork. The short legs are pinkish to grey, reddish prior to breeding. Non-breeding birds have a smoky grey back instead of white.

Like all storks, it flies with its neck outstretched. It is relatively small for a stork and stands at 68 cm height (81 cm long). The Asian Openbill feeds mainly on large molluscs, especially Pila spp., and they separate the shell from the body of the snail using the tip of the beak. The tip of the lower mandible of the beak is often twisted to the right. This tip is inserted into the opening of the snail and the body is extracted with the bill still under water. Jerdon noted that they were able to capture snails even when blindfolded.

Thanks Gopal Murli once again for your prompt identification help.