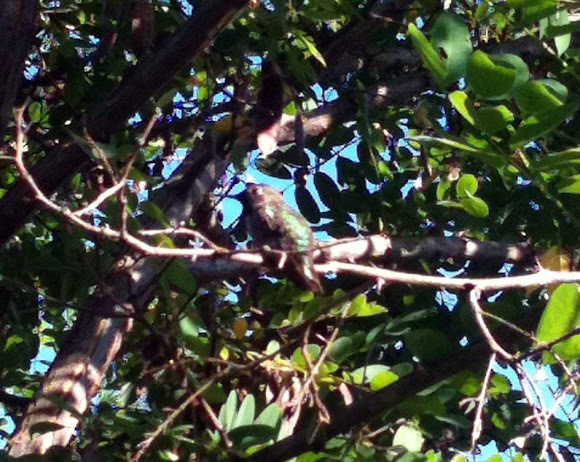 The Anna's Hummingbird (Calypte anna) was named after the 19th century Italian duchess Anna De Belle Massena. Anna's is the most common hummingbird in southern California, and one of only three species that are permanent residents of the US or Canada (Allen's and Costa's are the others). Unlike most other hummers, Anna's has a (minimal) song. Plumage Adult male: Metallic green back, dark rose-red crown and gorget, grayish breast. Adult female: Green back, grayish-white breast, white throat with some red spots, white tips on outer tail feathers. Juveniles: Young of both sexes look like the adult female, but may have unmarked throats. Anna's Hummingbirds feed on nectar from flowers and feeders. This hummingbird eats more insects than any of the other North American hummingbirds. They pluck spiders and trapped insects from spider webs. They also visit sapsucker holes and feed on sap and insects attracted to the holes. Hummingbirds feed through a long, tube-like tongue that darts into the flower's corolla for nectar. The tongue, shaped like a "W", uses capillary action to absorb the nectar much like a paper towel absorbs water.

Distribution Observed in Alabama, Alaska, Arizona, Arkansas, California, Colorado, Florida, Georgia, Idaho, Kansas, Louisiana, Mississippi, Missouri, Montana, Nevada, New Mexico, Oregon, Pennsylvania, Tennessee, Texas, Utah, Washington, and British Columbia (resident on Vancouver Island). The Anna's hummingbird is thought to have adapted to the presence of humans because it is now a year-round resident in many areas where it was not in years past. In cooler climates they would migrate to warmer places in search of food. As long as humans put out hummingbird feeders and plant hummingbird friendly flowers they should continue to stay year round.