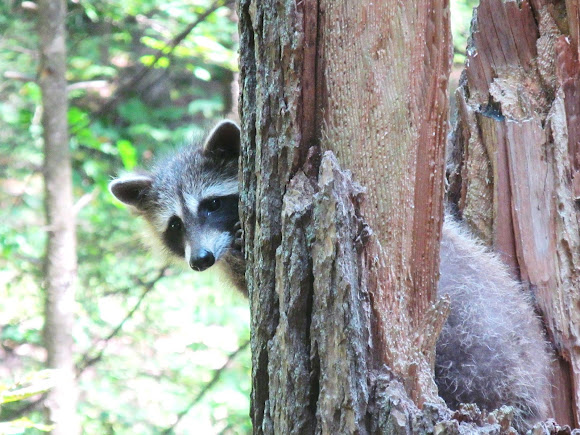 There is an interesting story associated with this guy. I was talking a walk in the woods and wading in the creek of Orchard Hills in Newtown, CT with my cousin and grandmother. We spotted a man walking towards us holding this little raccoon. He told us that he often comes to the forest looking for hurt and injured animals to take care of. He told us he has egrets, herons, rabbits, etc. He said that this guy's parent had been killed by a car and he was taking care of him until he was old enough to be on his own. He set him down inside an old stump and on a rock and it was so cute to see him play around. We also got to pet him. It was an awesome experience. Raccoons are native to the US and have been introduced in Germany, Denmark, Japan, and parts of the middle east. They measure 16 to 28 inches and weigh 10 to 20 pounds. They have gray fur with a black mask over their face.