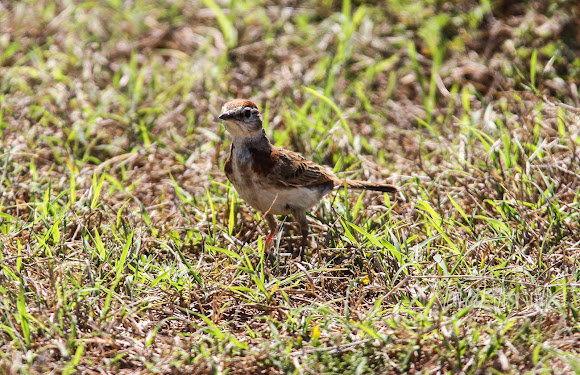 The red-capped lark is a 14- to 15-cm-long bird, with a typically upright stance. The colour of the streaked grey to brown upperparts is variable, with subspecies differing in hue and brightness, but this species is easily identified by its rufous cap, white underparts, and red shoulders. The short head crest is normally not noticeable except when it is raised during courtship displays. The male has redder plumage and a longer crest than the female. Juveniles lack the red cap and shoulders of the adults, have dark spotting on the breast, and white spots on the dark brown upperparts.

The red-capped lark is a species which feeds on seeds and insects in very short grass or on patches of bare ground. It is found in flocks which sometimes number hundreds of birds when not breeding. It forages on bare ground, moving with short runs as it searches for seeds and some insects.

The call of the red-capped lark is a tshwerp like a sparrow, and the song, given in the display flight, is a jumble of melodious phrases treee, treee, tip-tip, tippy, tippy tippy. It also imitates other birds.