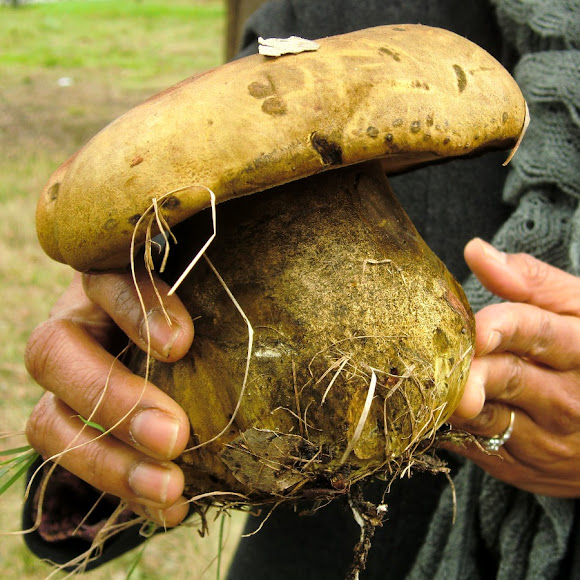 A thick bulky mushroom with a cap about 100mm wide. The convex cap with an even margin was a pale brown with dark stains. The stipe was the same colour as the cap with purplish black patches. The top of the stipe close to the cap was thinner ( about 45mm) than the bulbous base (95mm). The stipe looked like it had been nibbled on exposing a deep olive green flesh. The under surface of the cap showed the irregular margins of thousands pore openings ( pic #4). The surface was a dull yellow. There was a deep depression between the pore surface and the start of the stipe and the top of the stipe also showed a small "flange-like" ring.

Growing on grass under eucalyptus trees

This mushroom looked like a little stump in the grass and had nothing distinctive. But, a closer look revealed something amazing ! a very exciting find. Apparently these mushrooms can be found anytime of the year provided there is soaking rain - hoping to see more, then...

williefromwi, Thanks for the compliment. I do love these mushrooms but if look at my spottings you'll see that there are so many without an ID!. I am still learning the basics...I still have a couple more without an ID

wonderful spotting, I believe you will be my go to person when I need an id of mushrooms and fungi in the future. I can see you have both a love and knowledge of them

Thanks guys....can you believe that this is just a baby ! - I would have passed out had i seen a larger one. This was exciting enough to take me to hospital !!
Martin, I was hesitant about putting up a west australian common name for this but it is Australian and a giant bolete so I will..

Wow that's a nice big one! Great spotting and notes!

Something was having a meal. Look at the big chunk that has been taken out of the side.

This looks like the pot of gold at the end of the rainbow. What an impressive specimen this is!!! ...and a meal ? (I wouldn't be eating any fungi at the moment) This link (scroll down) suggests a common name for you. http://morrie2.wordpress.com/category/fu...