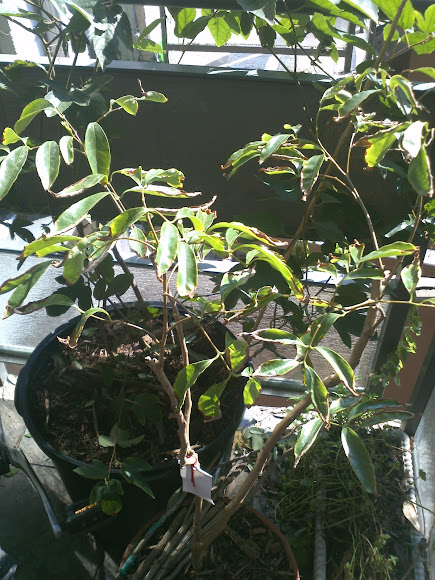 This is an air layered cutting that I purchased. The leaves have turned brown and curled a bit, but I think it will recover and be just fine. Should, with luck, produce fruit next year..

The lychee (Litchi chinensis) is the sole member of the genus Litchi in the soapberry family, Sapindaceae. It is a tropical and subtropical fruit tree native to southern China, Taiwan and Southeast Asia, and now cultivated in many parts of the world. The fresh fruit has a "delicate, whitish pulp" with a fragrant flavor. Since this perfumy flavor is lost in canning, the fruit is usually eaten fresh.[2] An evergreen tree reaching 10–28 meters tall, the lychee bears fleshy fruits that are up to 5 cm (2.0 in) long and 4 cm (1.6 in) wide. The outside of the fruit is covered by a pink-red, roughly textured rind that is inedible but easily removed to expose a layer of sweet, translucent white flesh. Lychees are eaten in many different dessert dishes, and are especially popular in China, throughout Southeast Asia, along with South Asia and India.[2][3] The lychee is cultivated in China, Thailand, Vietnam, Japan, Bangladesh and northern India (in particular Muzaffarpur Bihar, which accounts for 75% of total Indian production).[2][4] South Africa and the United States (Hawaii and Florida) also have commercial lychee production.[2] The lychee has a history of cultivation going back as far as 2000 BC according to records in China. Cultivation began in the area of southern China, Malaysia, and Vietnam. Wild trees still grow in parts of southern China and on Hainan Island. There are many stories of the fruit's use as a delicacy in the Chinese Imperial Court. It was first described and introduced to the west in 1782.[1]