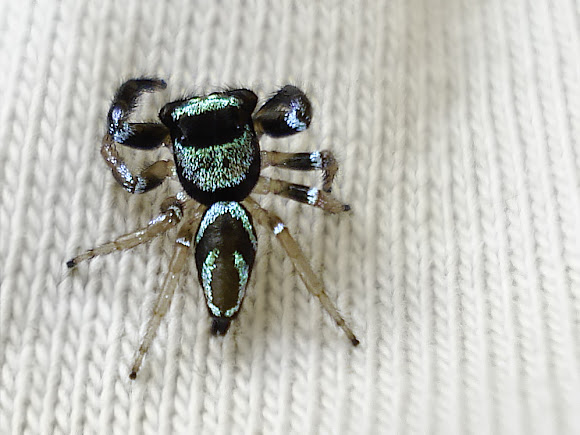 This is a dual-colored spider.. The species is iridescent green-blue. From one angle it looks blue in color and in another angle it looks green in color..!! From the front view, the female's face is black..

Common in the leaves of garden plants, and in forest herbs.Thiania species is distributed throughout the South-East Asia.

These spiders are commonly seen on leaves. The cephalothorax is flat and longer than broad. The abdomen is elongated, rounded at the front end and converging steadily to the spinnerets. Cephalothorax is black or dark colour and followed by a broad, crescent-shaped band of iridescent, bronze-coloured, squamose hairs. First pair of legs are slightly swollen and larger than others.

Thanks a lot vipin..!

A very beautiful spider and an amazing photograph sumukha!

Thanks OnengDyah and Yuriana..:-) This spider had amazing and glittering colors..!

that is a pretty spider...and a nice spotting

Cool..., that patterm and colour it' s really pretty...great spotting.

Thank you so much Carol..! That means a lot to me. Im happy that you are no more feared about spiders and you have started to like them..:-)

I can't believe what a year brings... from fear of spiders for me to absolute wonderment and amazement of all the beautiful spiders you have found in your part of the world. Great!

Yes jolly.. It had amazing green and blue colors on its body..!

Thank u AzuraFirdausW.. Blue-green combination looks great on this spider..!

Thank u very much MayraSpringmann..:-)