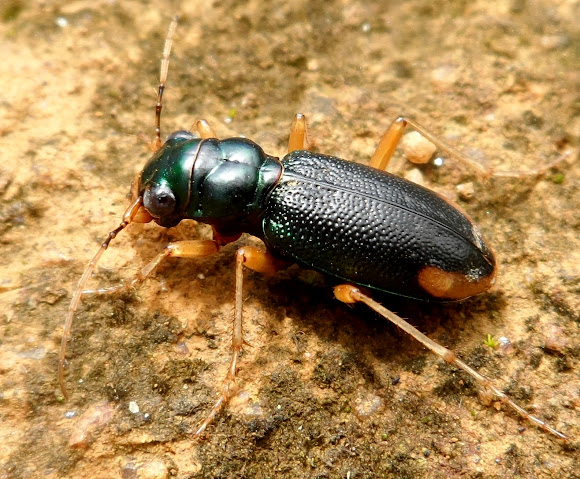 Typical for the ancient beetle suborder Adephaga to which they belong, they have paired pygidial glands in the lower back of the abdomen. These are well developed in ground beetles, and produce noxious or even caustic secretions used to deter would-be predators. In some, commonly known as bombardier beetles, these secretions are mixed with volatile compounds and ejected by a small combustion, producing a loud popping sound and a cloud of hot and acrid gas which can injure small mammals, such as shrews, and is liable to kill invertebrate predators outright. To humans, getting "bombed" by a bombardier beetle is a decidedly unpleasant experience. This ability has evolved independently twice as it seems – in the flanged bombardier beetles (Paussinae) which are among the most ancient ground beetles, as well as in the typical bombardier beetles (Brachininae) which are part of a more "modern" lineage. The Anthiini, meanwhile, can mechanically squirt their defensive secretions for considerable distances and are able to aim with a startling degree of accuracy; in Afrikaans they are known as oogpisters ("eye-pissers"). In one of the very few known cases of a vertebrate mimicking an arthropod, juvenile Heliobolus lugubris lizards are colored similar to the aposematic oogpister beetles, and move in a way that makes them look surprisingly similar to the insects at a casual glance. Common habitats are under the bark of trees, under logs, or among rocks or sand by the edge of ponds and rivers. Most species are carnivorous and actively hunt for any invertebrate prey they can overpower. Some will run swiftly to catch their prey; tiger beetles (Cicindelinae) can sustain speeds of 8 km/h (5 mph) – in relation to their body length they are among the very fastest land animals on Earth. Unlike most Carabidae which are nocturnal, the tiger beetles are active diurnal hunters and often brightly coloured; they have large eyes and hunt by sight. Ground beetles of the species Promecognathus laevissimus are specialised predators of the cyanide millipede Harpaphe haydeniana, countering the hydrogen cyanide which makes these millipedes poisonous to most carnivores. As predators of invertebrates, including many pests, most ground beetles are considered beneficial organisms. The caterpillar hunters (Calosoma) are famous for their habit of devouring insect larvae and pupae in quantity, eagerly feeding on tussock moth (Lymantriidae) caterpillars, processionary caterpillars (Thaumetopoeidae) and woolly worms (Arctiidae), which due to their urticating hairs are avoided by most insectivores. Large numbers of the Forest Caterpillar Hunter (C. sycophanta), native to Europe, were shipped to New England for biological control of the Gypsy Moth (Lymantria dispar) as early as 1905.