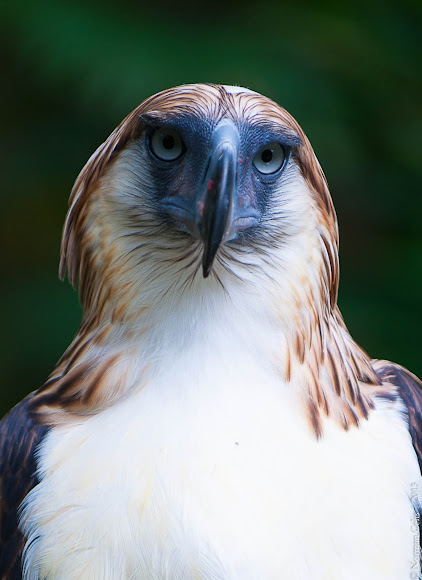 The Philippine Eagle (Pithecophaga jefferyi), also known as the Monkey-eating Eagle, is an eagle of the family Accipitridae endemic to forests in the Philippines. It has brown and white-coloured plumage, and a shaggy crest, and generally measures 86 to 102 cm (2.82 to 3.35 ft) in length and weighs 4.7 to 8.0 kilograms (10.4 to 17.6 lb). It is considered the largest of the extant eagles in the world in terms of length, with the Steller's Sea Eagle and the Harpy Eagle being larger in terms of weight and bulk. Among the rarest and most powerful[quantify] birds in the world, it has been declared the Philippine national bird. It is critically endangered, mainly due to massive loss of habitat due to deforestation in most of its range. Killing a Philippine Eagle is punishable under Philippine law by 12 years in jail and heavy fines.

The Philippine Eagle is endemic to the Philippines and can be found on four major islands: eastern Luzon, Samar, Leyte, and Mindanao. The largest number of eagles reside on Mindanao, with between 82 and 233 breeding pairs. Only six pairs are found on Samar, two on Leyte, and a few on Luzon. It can be found in Northern Sierra Madre National Park on Luzon and Mount Apo and Mount Kitanglad National Parks on Mindanao. This eagle is found in dipterocarp and mid-montane forests, particularly in steep areas. Its elevation ranges from the lowlands to mountains of over 1,800 metres (5,900 ft). Only an estimated 9,220 km2 (2,300,000 acres) of old-growth forest remain in the bird's range. However, its total estimated range is about 146,000 km2 (56,000 sq mi).

Nice shot - could you please tell us where you saw it?